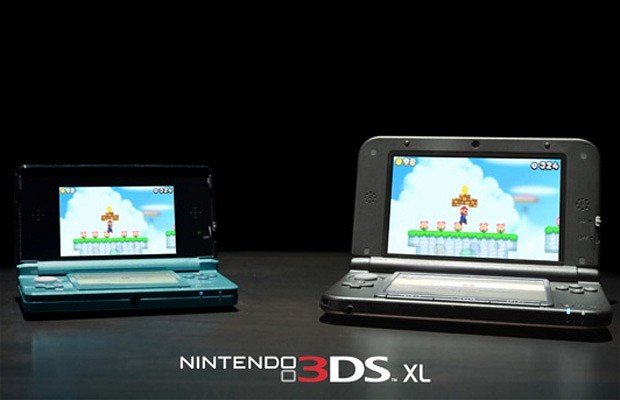 Nintendo has made extra large handhelds before, like the DSi Xl, so it didn’t come as a surprise when Nintendo announced this new addition to the 3DS family. With 90% more screen, (that’s 190% of the original) the 3DS Xl offers an easier experience on the eyes and a better looking game- but only for polygon based games like Legend of Zelda and Kid Icarus. 2D/side-scrolling games take a huge hit, and text is smashed to the point of eye strain. However, the battery life is 3.5 to 6.5 hours compared to the 3 to 5 hours with the current-model 3DS. (The battery will last 6 to 10 hours when playing non-3D DS games.) This is almost like the original DS, which you could carry around the whole day without worrying about the Wi-Fi being on or how bright the screens were. Of course, the bigger screens (4.88-inch top screen and a 4.18-inch bottom screen) need more juice, and so the 3DS-XL has a huge battery, with most of the empty-looking bottom half being battery inside. The reason the bottom looks so empty is that it still lacks the second circle pad. Of course, Nintendo will let us buy a bigger Circle Pad Pro, along with a charger. That’s right- this DS isn’t shipped with a charger. While this is actually common practice in Japan, Nintendo is taking a risk gambling that most US adopters are upgrading and have owned a DSI/DSi XL/3DS, all of which share Nintendo’s proprietary charger. This isn’t a major problem, as chargers can be picked up easily and rather cheaply, but all these things an avid gamer now needs to buy add up. As a sort of apology, Nintendo did ship a 4GB SD card with the 3DS-XL, for use with their downloadable games store and for storing other content. As for the product itself, it will be sold in red/black and blue/black versions for $199- only $30 more than the cumbersome current model, with its sharp corners and awkward “layers.” The 3DS-XL has nice smooth curves, and much less gloss. A simple indent instead of the weird green 3D light, and the switch actually switches off, snapping into place. Overall, a much better version that doesn’t look rushed out the door at all, and is just as thin. However, this is more of a reason to buy than an upgrade, as current 3DS owners gain little.