The Impossible Test CHRISTMAS is the Christmas edition of the old-school iOS and Android series The Impossible Test, and it comes back around every Christmas season to stump you with trick questions. You’ll do math, shake your phone, answer questions with questions, and more on your way to trying to get every answer right in this brain buster. 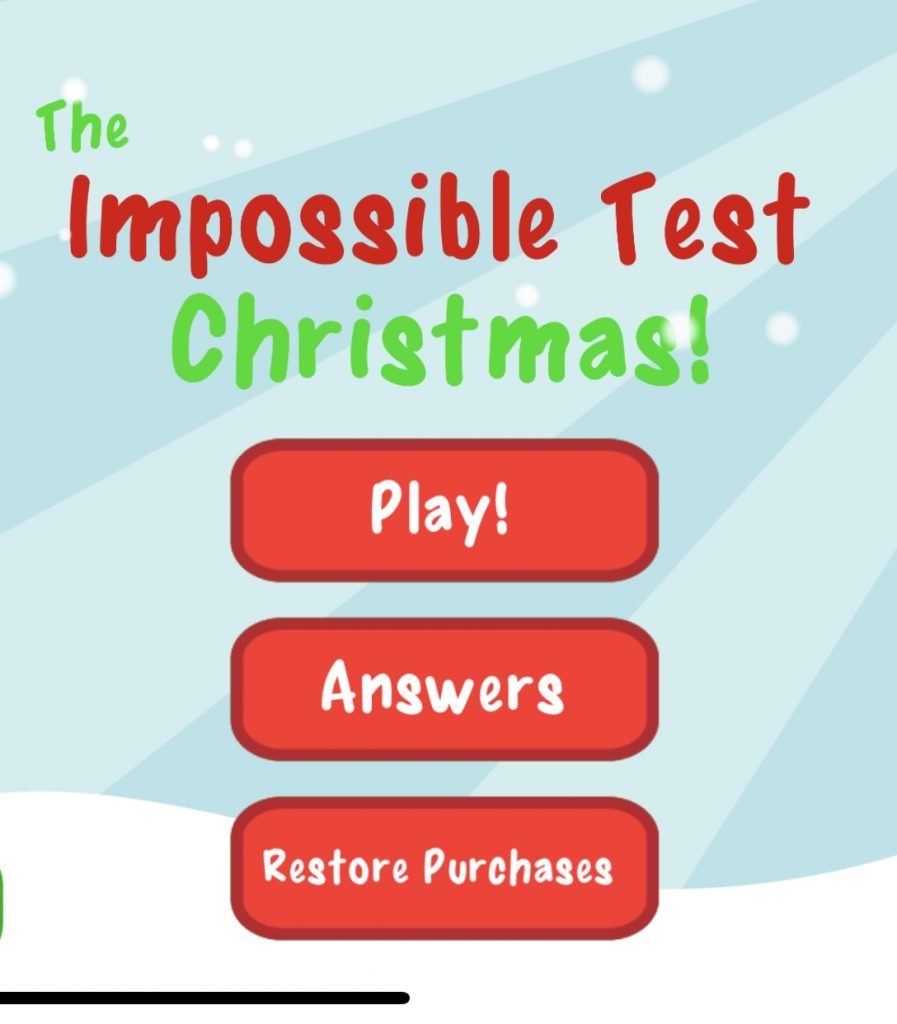 Read on for answers to every single question in The Impossible Test CHRISTMAS! (note: the questions are the same in Normal, Mirror, Sudden Death, and Endurance mode, just with different conditions – explainer is at the end of the article)

Question 1: To Make It Snow, shake the phone.

Question 2: To turn off the lights, drag the word “off” from the question to the christmas tree.

Question 3: To make the present burst open, tap the snowballs and shoot them at the present until it bursts.

Question 4: “Cool present! Maybe you should tap it?” Just tap it to pass the question.

Question 5: “Tap Christmas Day” To do this, count squares on the calendar until you hit 25, then tap that square.

Question 6: To launch the sleigh, drag the sleigh as far left on the screen as possible, and then let go of it and it will launch by itself.

Question 7: To stuff the stocking without coal, drag the word “stuff” out of the question into the stocking.

Question 8: To make a snow angel, drag the word “snow” onto the word “angel”, then rub your finger over the middle of the screen until an angel appears, then hit the forward arrow.

Question 9: To stop the stars from flashing, move the stars around until you find a red button underneath one of them, then press it.

Question 12: To catch the icicles, tap on each one when it falls down, and don’t miss any of them. Be ready to start this stage as soon as you beat the previous one.

Question 13: To hang the wreath, find a nail on the far left side of the screen, drag it over to the door and it will push in. Then drag the wreath to the door where you put the nail in.

Question 14: To touch purple, green, red, and yellow, tap the purple elf, the green elf, then the red elf, then the word “yellow” in the question.

Question 15: To put the primary color presents in the chimney, put the red, yellow, and blue presents ONLY, in the word “chimney” in the question.

Question 16: To warm up the hot chocolate, move the mug and tap the “HEAT” button behind the mug.

Question 17: Just count all of the points on the poinsettia including the green ones in the middle. There are a total of 25.

Question 19: To make a cookie, tap on the letters to spell out the word “gingerbread”.

Question 20: To bake the cookie at 425 degrees Fahrenheit, tap the word “bake” in the question, then increase the temperature from 50 to 425, then press the “bake” button below the up/down arrows.

Question 21: Which order did the lights appear? (from the Christmas tree in question 2) Orange, Green, Red, then Blue. Put them in the corresponding slots.

Question 22: To make a snowman from right to left, tap the word snowman twice, then put the right ball on top of the left ball. Tap again to make another ball appear, and put that on top of the two stacked balls. Then tap where the snowman’s right arm should be to make an arm appear. Tap the tip of the arm to make ah and appear. Then tap where the face and top of the head would be to make a face and a hat. Then make a hand and arm on the left side of the snowman.

Question 23: To help Santa go down the chimney, tap the chimney five times to widen it, then drag the word “down” into the chimney.

Question 26: How many candy canes are there? Turn the phones upside down to make them fall out of the stockings. There are 12 candy canes in each pile or 36 total.

Question 27: To put the reindeer in alphabetical order: Blitzen, Comet, Cupid, Dancer, and Dasher on the top row and Donner, Prancer, Rudolph, and Vixen on the bottom row.

Question 28: To tie a string to each ornament, tap the ornaments when they are upright to stop them. Then pull the word string out of the question and put it on three of the ornament hooks. Then shake your phone to tie the string to the ornaments.

Question 30: What changed from the previous question? The sixth star on the Christmas card is rotated differently.

Question 31: To tap the two identical hollies, tap the top right and bottom middle ones.

Question 34: How many snowflakes did you tap in question 24? You tapped 11 times, so choose 11 snowflakes.

Question 35: To catch the elf, time your tap until the elf pops up in the window. You have to be super careful with this one.

Question 36: To stop the stockings from burning, grab them with your finger and pull them up away from the fireplace.

Question 37: To get the snow off of the tree, shake the tree to make the snow fall off.

Question 38: To find the real Santa, tap on the “real santa” word.

Question 40: To protect the snowglobe, tap on the snowballs before they hit it. If you successfully tap on a snowball, it will disappear.

Mirror Mode: Do all of the questions the same way, except everything is in reverse. But the answers are the same.

Sudden Death: Same as normal mode except one life instead of five lives.

Endurance: Same as normal mode except the questions never end, they simply rewind.