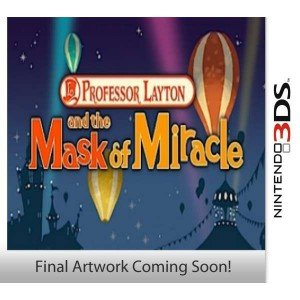 This new game is the first in the Professor Layton series to be developed for the Nintendo 3DS, and will also be playable on Nintendo 3DS XL. (LL for our Japanese readers) The release date is set roughly, November of 2012. This will be the fifth game released and the second chronologically. The rating is still pending from ESRB, and the genre has been set as adventure-puzzle. Following traditional Professor Layton tradition, the game allows you to find hint coins by touching the bottom screen via stylus, and will include more cut scenes and puzzles than ever before. The developer and publisher remain Level-5, and the nostalgic puzzle and dialogue music will be available for replay once you earn enough Picarats as usual. Also, you can download puzzles for free for a whole year, meaning 365 extra puzzles will be added to the immense retinue already provided, in-game.

If you are unfamiliar with the Professor Layton game play, you move around the screen by stylus inputs, searching for hint coins (redeemable for in-game hints) and interacting with characters. They can give hints and puzzles, and so can the environment. Occasionally, you must solve puzzles to continue the game, but many can be bypassed. If you incorrectly answer a question, the score value (measured in  Picarats) will decrease, but you can keep trying until you successfully answer the question, or solve the puzzle. The game was released in Japan as a launch-title game for the Nintendo 3DS, and nearly one in every three 3DS buyers picked up a copy.

The game will feature beautiful scenes and animation as before, and buyers can expect to see the same attention to detail as before. The 3D effect added by the Nintendo 3DS is entirely optional, but early reviews say that the lack of intense action makes the 3D less strenuous on the eyes and is easy to watch for hours at a time.