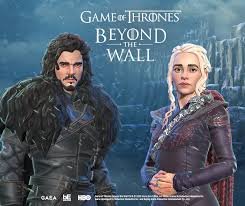 Game of Thrones Beyond the Wall is a new RPG that takes place before the timeline of the show and the books, putting you as the commander of the Night’s Watch, and giving you many different characters to use to defend the Seven Kingdoms and the Wall.

There are many ways to get rewards, as is customary for most mobile RPGs, but one way to get entirely free rewards is to use Redemption Codes. Redemption Codes are entirely free, usually promotional codes, that the developers give away in order to allow you to redeem rewards.

Read on for a list of Redemption Codes and how to find more of them in Game of Thrones Beyond the Wall!

First of all, you need to know how to get to the screen where you enter them. Tap on your avatar to go to your player profile.

Once you’re there, it will pop up, and on the right will be a number of tabs, including Redeem a Code. Tap here to go to the redemption code screen.

Once you are there, you will see a redemption code text box. Now enter the code in, and redeem your reward by hitting the “confirm” button.

There are plenty of ways to find more redeem codes and redemption codes. One of them is to use the official developer channels for the game, and for the developers themselves.

Of course, Facebook is on top of this list. Follow the Facebook page for Game of Thrones Beyond the Wall and look through old posts, and new posts, too. You’ll find redemption codes, usually associated with special events.

Go to the twitter feed for the game or for the developer, or both, and follow those feeds, too. You’ll often see new redeem codes announced on their wall.

There is also an official Subreddit for Game of Thrones Beyond the Wall, so be sure to go there and hit the search box and look for codes. When players find a new code, they’ll often post it there, so be sure to search up and down the Subreddit.

Other sources include Discord or even the review page in the App Store or on Google Play. Go to Discord and search “codes” or “redeem codes” or “redemption codes” to find more codes if they have been posted.

For the App Store and Google Play review pages, it’s a matter of random searching. Search through the app reviews and see if anybody has posted a promo code in there. Often you’ll find ones in there that other players miss.

Streamers often give away redemption codes as a part of their stream to promote the game. Search YouTube, Facebook Video, Twitch, or Mixer to look for videos of Game of Thrones Beyond the Wall, and to look for streamers who share codes.

Currently, there are no redemption codes, because not only is Game of Thrones Beyond the Wall too new, it’s not even out of preproduction yet. Bookmark this page and keep checking back, though. We will post them as we see them!

cbd crumble what is

Good Morning everybody , can anyone suggest where I can buy Canna Comforts CBD Tincture Isolate Natural Oil 1000mg?