Level 1: Which graphic is the most round? At the circle.

Level 2: How do you make the weather better? Drag all the clouds out of the way of the sun.

Level 4: Who would you like to play? Tap on the word “everyone“. When the share menu pops up, tap cancel.

Level 7: To make the equation true, drag it partially off the screen until it says one equals one.

Level 10: Which bowl has water in it? Grab the bowl and swing it around to make water slosh out of it, and repeat until you find the bowl that has the water.

Level 12: To score a bullseye, zoom in on the target with two fingers to make it bigger, then tap the knife.

Level 13: What hurts the most when hitting your head with stuff? The head, so tap the head in the question itself.

Level 14: How do you start dreaming? Hold your finger over his eyes and then swipe them shut to put him to sleep.

Level 15: To protect the bear, drag the word “protect” over the bear out of the question.

Level 16: How many apples are in the picture? Four, including the word Apple in the question.

Level 17: To help the turtle win the game, drag the carrot over to the rabbit first, then hit start.

Level 19: To find the red pocket with the money in it, turn the phone upside down and shake, and the money will come out of one of them.

Level 21: Nature is calling, so swipe left on the screen to find the empty urinal.

Level 22: To rescue the big bear, turn the phone upside down to make the key fall out of the bucket, then use that to open the door.

Level 24: To let him have hair, drag the hair out of the question onto his head.

Level 25: How to get a good figure? Grab her feet and drag them downward.

Level 26: To find the real chick, shake the phone and all of them will fall over except for the real one.

Level 27: How to secretly fart? Drag the guy off of the right side of the screen to hide his fart.

Level 28: To help the lady lose weight, take the balloons off the right side of the screen and put the string in her right hand.

Level 29: How to make a hydrogen balloon fly downwards? Turn the phone upside down.

Level 30: How to keep Jack from talking? Put your finger over his mouth for a few seconds.

Level 31: To find the blue, tap the blue in the question.

Level 32: To find the white polar bear, drag the word “white” over each one of the bears until one of them turns white.

Level 33: To make an earthquake of magnitude 6 or higher, shake the phone.

Level 35: To help her escape from the zombie, tap the platform that the top zombie is on to retract it, then tap the bottom doors to let the zombies through. Then send her to the exit.

Level 36: To help them escape the wilderness, cover the man with the umbrella, then give the man some water (straw in mouth), then put the paper boat in water.

Level 38: To click animals from small to big, tap the rat, the rabbit, the human, then the polar bear.

Level 39: To make the girl faster than a horse, put the girl on top of the horse.

Level 41: you have a low battery, so to kill time, swipe left on the screen to slide it to the right and find this game.

Level 42: The rabbit is five and the turtle is six. The turtle with an upside down turtle underneath it is eight, so the answer is 13.

Level 44: which color has changed? Refer back to previous questions for this. Green is the new color.

Level 47: How many holes in the pants? Pull the pocket out and count that hole, too. There are 8 holes – two leg, one waist, four rips in the legs (they are front and back) and one pocket.

Level 50: To get the golf ball into the hole, turn your phone and aim the ball until it goes in.

Level 51: To raise the temperature of the thermometer, put your finger on the base for about 10 seconds.

Level 52: The dog is too hot, so to cool the dog off, swipe on its body and move your finger up to remove it’s fur.

Level 53: The lady wants to be prettier, so shake the egg to crack the shell. When it breaks all the way open, take the egg white and put it on her face.

Level 54: The boy is unsatisfied with one bowl of rice, so I can get him another one, long press on the ball until the copy button pops up. When the copy button appears, tap it to clone it.

Level 55: to find a parking spot, drag the yellow car out of its spot and put the white car in the now empty spot.

Level 56: Tom is reticent, so to make him cheerful, get him a girlfriend. Tap the bushes until a butterfly comes out of one of them, then tap the butterfly to turn it into a girl.

Level 57: Bad results, fear of punishment. Use two fingers to rotate the 66 and change it to a 99.

Level 58: How many differences are in the two paintings? There are zero differences. They’re exactly the same.

Level 60: To help Bob find the cloud, the gift, and the pencil, top of the daily gift button to find the gift, and look for everything else hidden in the picture. Use this picture as a guide: 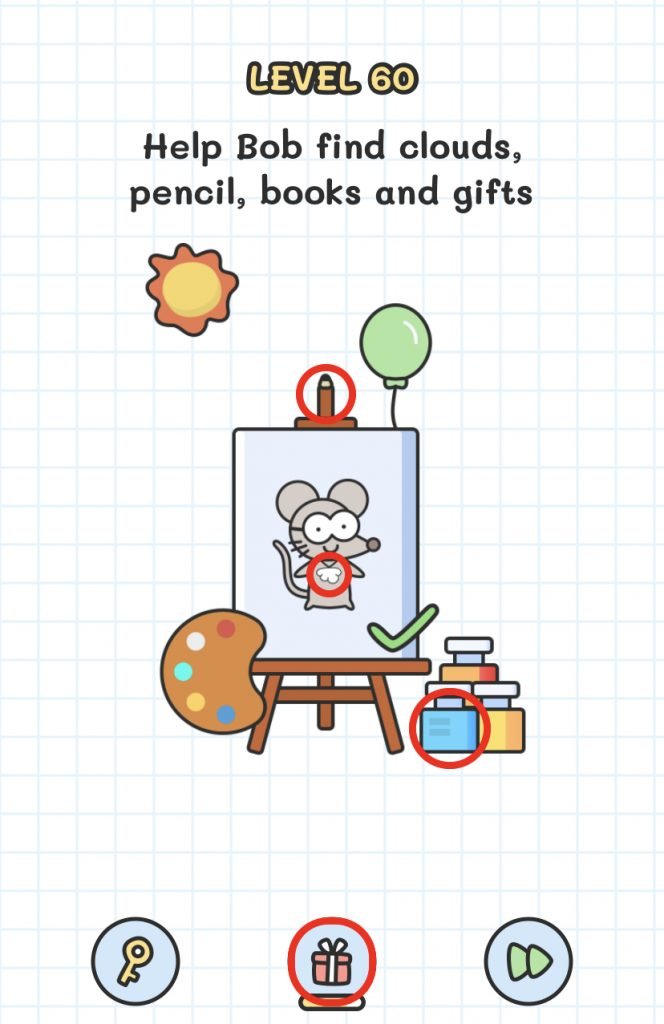 Level 61: One dollar for one drink, and two empty bottles for one drink. How many can you get with $20? You can get a total of 40 drinks.

Level 62:To complete the memory challenge, simply remember which animals are on the cards, or screen capture them before they flip over.

Level 63: currently there is no level 63. This page is simply a notification that you have completed every challenge.