BitLife fans have been asking for some sort of political aspect to be added to the game, and they finally got their wish. With the US presidential election coming up, now you can play politics in BitLife!

You can run for president, run for mayor of your city, or even just run for a very low level office, such as the school board. You can make changes, gradually become more powerful, and to do anything else that a politician would do.

Read on for a political guide in BitLife! 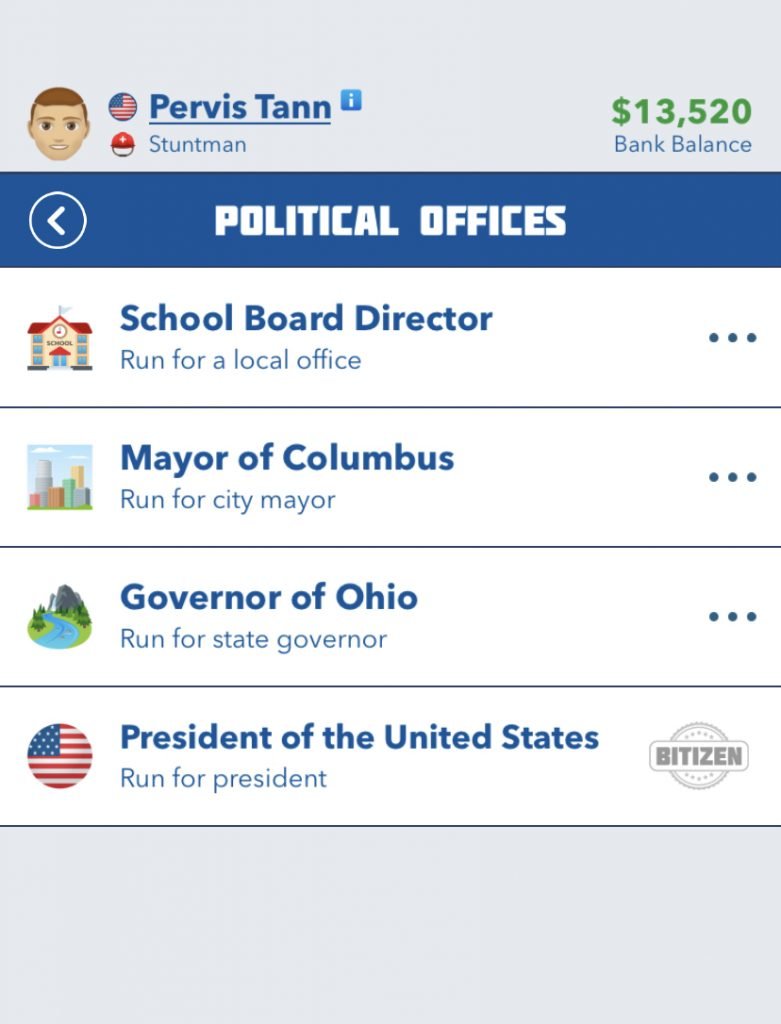 When you go to the game after updating it, Open up the jobs or the school tab and you will notice a new option at the bottom called “political offices“. Tap on this button to see all of the offices available.

You can run for any office you want. Which offices you see depend on which character you are using, what city and country they are from, and other factors. You will be able to run for president or Prime Minister, for the mayor of your city, or for some low level position like school board or city council. 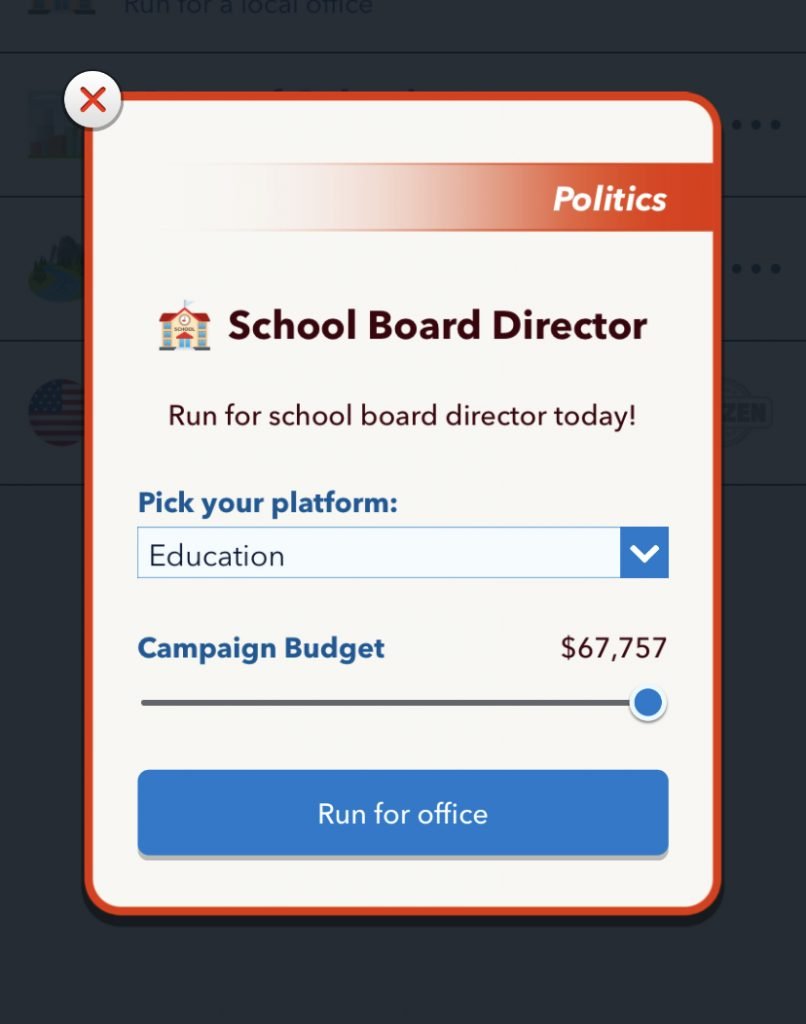 Generally, the more money that you spend on the campaign, the more likely your chances will be off getting on the ballot. Just like in real life, we suppose. 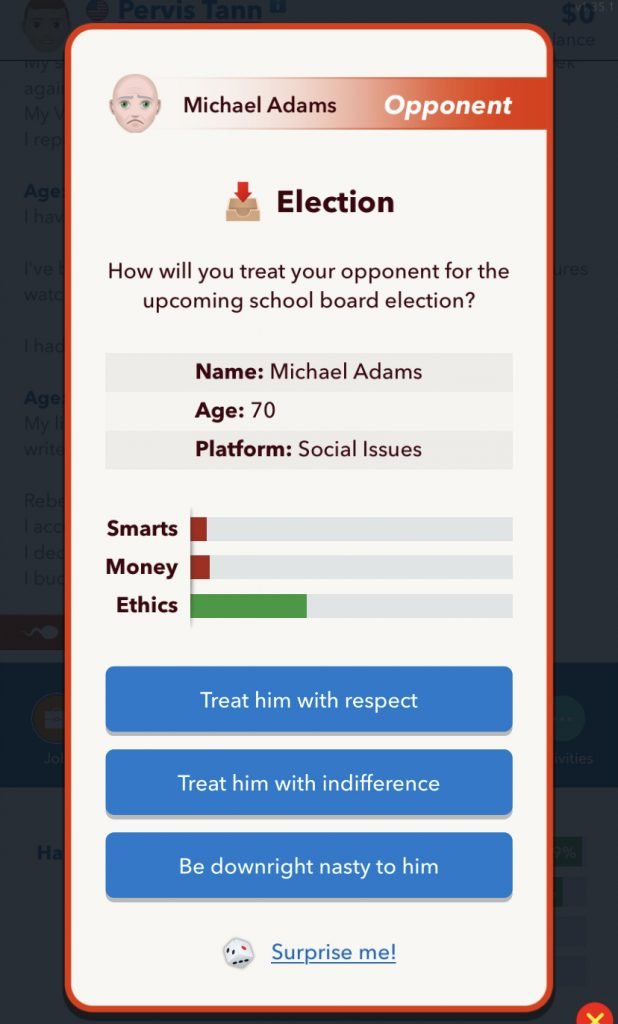 There are also age limits for each position; again, this depends on where you are and what country your character is from. So if you don’t meet the age limit yet, then age your character until they reach the limit.

You also can’t run for office if you’re going to any form of school, such as college or university. Graduate or drop out first, and then try running for office.

If you do make it onto the ballot, a series of pop-up questions will show up. For example, you might be asked where you stand on a certain issue, or how you’re going to treat your political opponent. Your answer to these questions can’t determine your chances of winning the election. 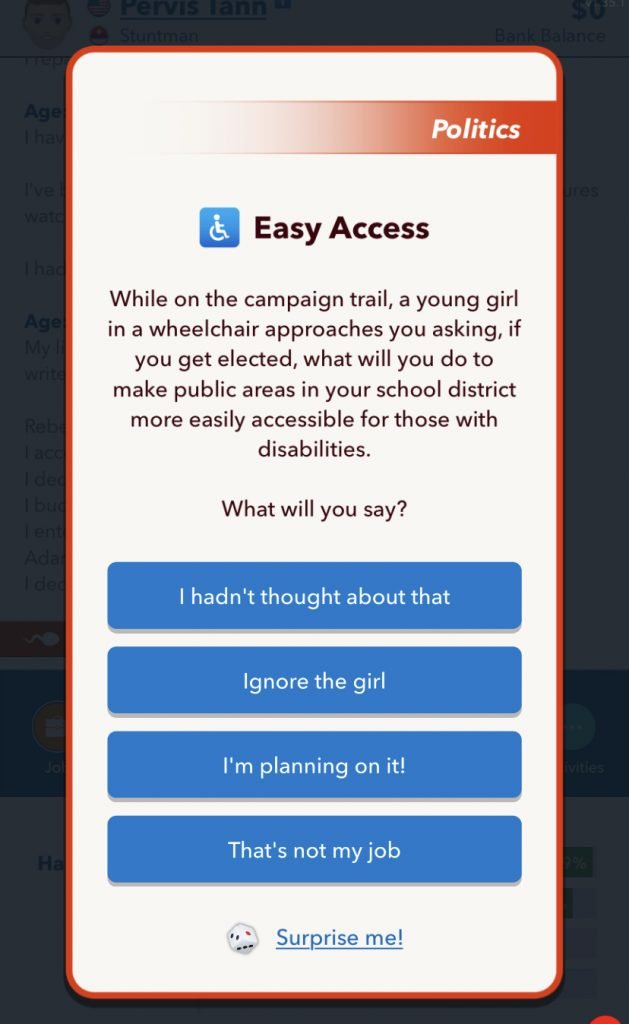 Once you do get elected, you have plenty more of these decisions to make. You have to make the right decisions in order to avoid getting impeached or voted out of office during the next election. 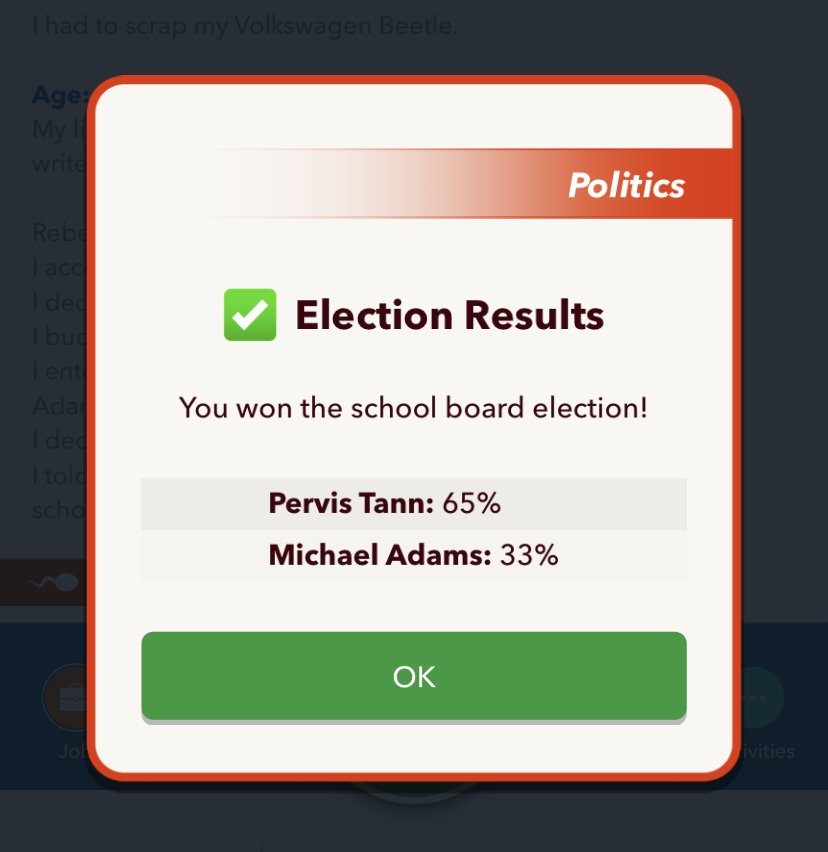 Occasionally, you will be asked for political favors. You can either except them or reject them; the right answer depends on the situation and what your position is at the time.

One thing that can help with this is reading the newspaper so that you can keep up with the concerns of your party and the people that you serve. This can also help you make the right decisions as far as political actions or rallies.

When you make a speech, you can choose what the objective is, what issue you want to focus on, and you can pick your medium, such as a public speech or live streaming. Again, this also depends on your approval ratings, the objective for the office that you are in, and where you live/where you hold office.

If you want to become president or the leader of your country, you have to be a Bitizen. Bitizenship is a one time payment of $4.99 or the equivalent in your local currency.

Once you make that in app purchase, the process remains largely the same as running for any other office, except that you will have to spend far more money in order to succeed. That’s why it helps to be a millionaire or a billionaire.

cbd come from where

FIND YOUR PERFECT PARTNER IN THE USA

By way of introduction, I am Mark Schaefer with Nutritional Products International (nutricompany.com). We serve international and domestic manufacturers seeking to gain more distribution within the United States. Your brand recently caught my attention, so I am contacting you to discuss the possibility of expanding your distribution reach. We provide expertise in all areas of distribution, and our offerings include the following: * Rapid entry into the U.S. market. * Purchase Orders * FDA Regulatory Compliance * Active accounts with major U.S. distributors and retailers. * Our proven sales force has public relations, branding and marketing all under one roof. We maintain active business relationships with over 200,000 distribution outlets across the nation, and we have a direct line of contact with executive-level buyers. Our company has a proven history of initiating accounts and placing orders with major distribution outlets. Our history allows us to have intimate and unique relationships with key buyers across the United States thus giving your brand a fast track to market in a professional manner. Please contact me directly at 561-544-0719 or by replying, so we can discuss your brand further. Kind Regards, Mark Schaefer, Director Of Global Procurement, Nutritional Products International, 101 Plaza Real S, Boca Raton, FL 33432, Office: 561-544-0719

This was great Thank youuu

This is good advice for my crowd, so I'll link back to this article and you should likely get some new readers. It's a step up from anything else I've seen about this topic. Thanks for the fresh viewpoint!