Easy Game – Brain Test is a new trick question game by Easybrain, who is responsible for some of the most popular iOS and Android puzzle games in existence. They’re one of the bigger companies to get in on the trick question game craze, so this game has lots of original questions, a lot of polish, and tons of replay value. 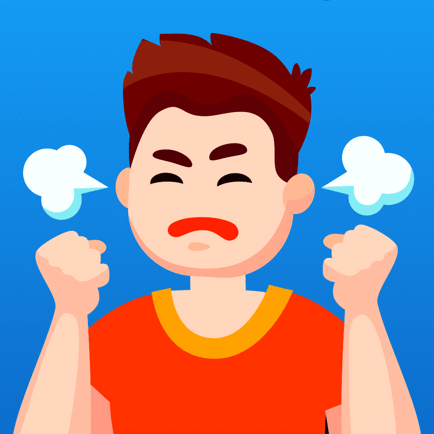 You have to answer questions that are more complicated than they seem, require you to think outside the box, or that exist simply to trick you. You’ll have to answer math questions, shake and rotate your phone, and all kinds of other strategies to try to figure out the answers.

Read on for all of the answers and solutions to every question and level in Easy Game – Brain Test! 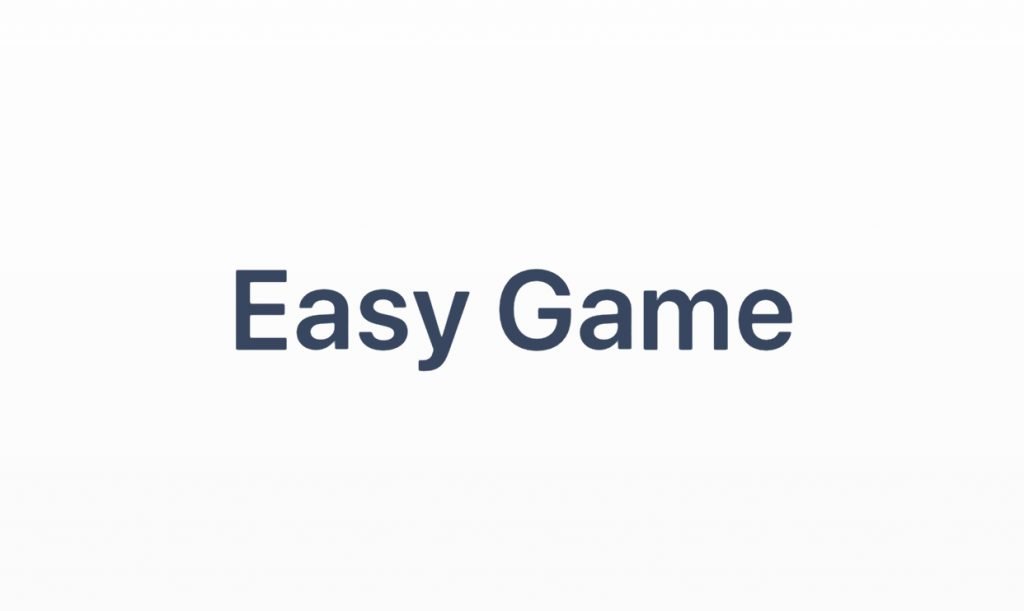 Level 1: Which is lighter? First tap the balloons, because they’re lighter, then tap the apple, because that then becomes lighter.

Level 2: To help John, zoom out on the caveman to shrink it so that John is in no danger from it.

Level 4: Which hand is the coin in? Tap both of the hands at the same time to find the coin.

Level 5: How many leaves does the tree have? Shake the phone and all but 13 of the leaves will fall off of the tree, so the right answer will be 13.

Level 6: To remove the piano, zoom out on the hole in the floor to increase it to the same size as the piano. Then tap the rope to cut it and drop the piano into the hole.

Level 7: To select six bananas, tap the word “apple” and a text box will appear. Change the word to “banana” and the picture will change too. Then tap all six bananas.

Level 8: What can you see? There is an elephant hidden in the picture, so write “elephant” to answer correctly.

Level 9: To beat Dave at dice, take the colon from after the word “you” and put it on your dice to make it higher than Dave’s dice.

Level 10: To help the elderly woman finish the scarf, type 4b5a5c6b to continue the pattern vertically.

Level 11: How many rabbits are inside the hat? The number is infinite, so turn the phone sideways to turn the 8 sideways into an infinity symbol, then tap the symbol.

Level 13: To turn on all of the lightbulbs, zoom in on the middle and bottom switches to match the size of the bulbs. Then tap all three of them to turn them on.

Level 14: To guess the card, swipe right on the guy to turn him around and see the card he’s holding, then match the card to the one he’s holding.

Level 15: To activate the hourglass, hold it with your finger, then flip your phone upside down.

Level 16: To cross the river, swipe right on the river to find the bridge, which will allow you to cross.

Level 17: Which chest contains gold? Move the word “gold” out of the question to one of the chests, then tap the chest with the word gold on it.

Level 18: To find the hidden objects, just tap around randomly until you find them all. Or use your phone’s zoom-in feature.

Level 20: To remove the three wrong cards from the pack, take the ten of hearts (duplicate), the king of spaces (not symmetrical), and the joker (crying) out of the pack. Then hit OK.

Level 21: To select the largest snowman, merge all of the other snowmen into the largest one to make it even larger, then tap the combined super snowman.

Level 23: Heads or tails? Combine the two buttons together by dragging one on top of the other. Then tap the combined “Heads or tails” button.

Level 24: To grow a flower, move the clouds out of the way to reveal the sun, which will grow you a flower.

Level 25: To let the bird out, move the key to the keyhole to unlock the cage, then shake the phone to wake up the bird and get it to fly out.

Level 26: To complete the snowflake, tap the squares to fill them in symmetrically, like in the picture below: 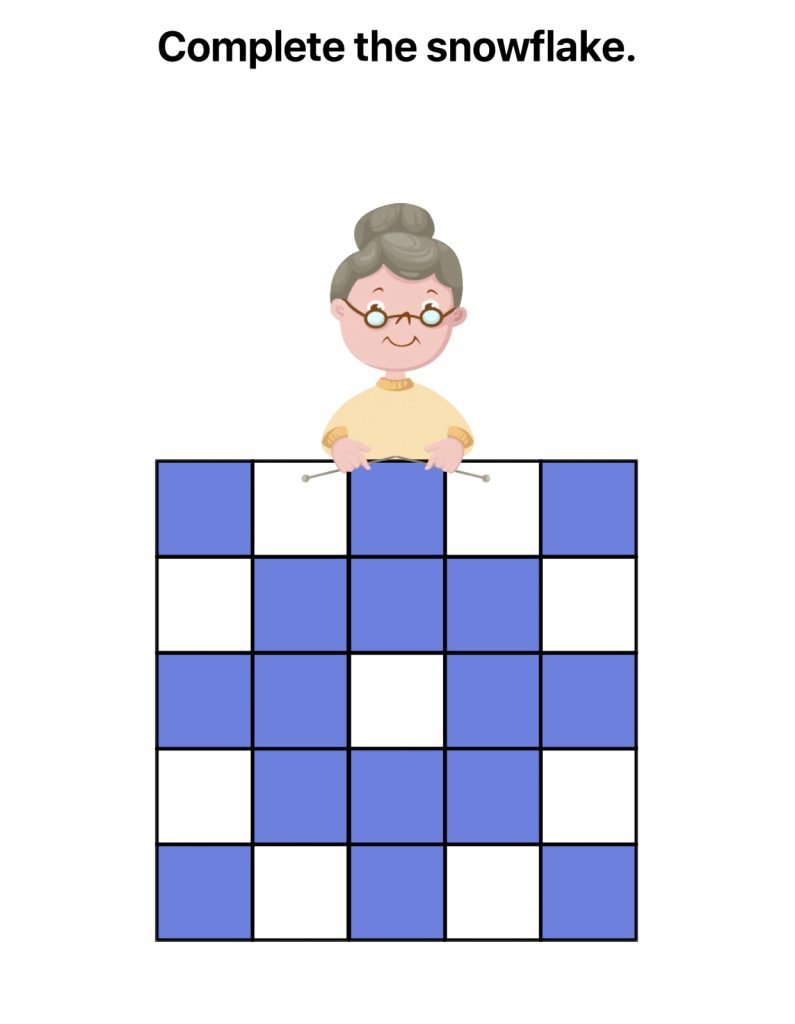 Level 27: To build a tower from these shapes, move the shapes around the grid until they snap into place automatically. Make it look like this: 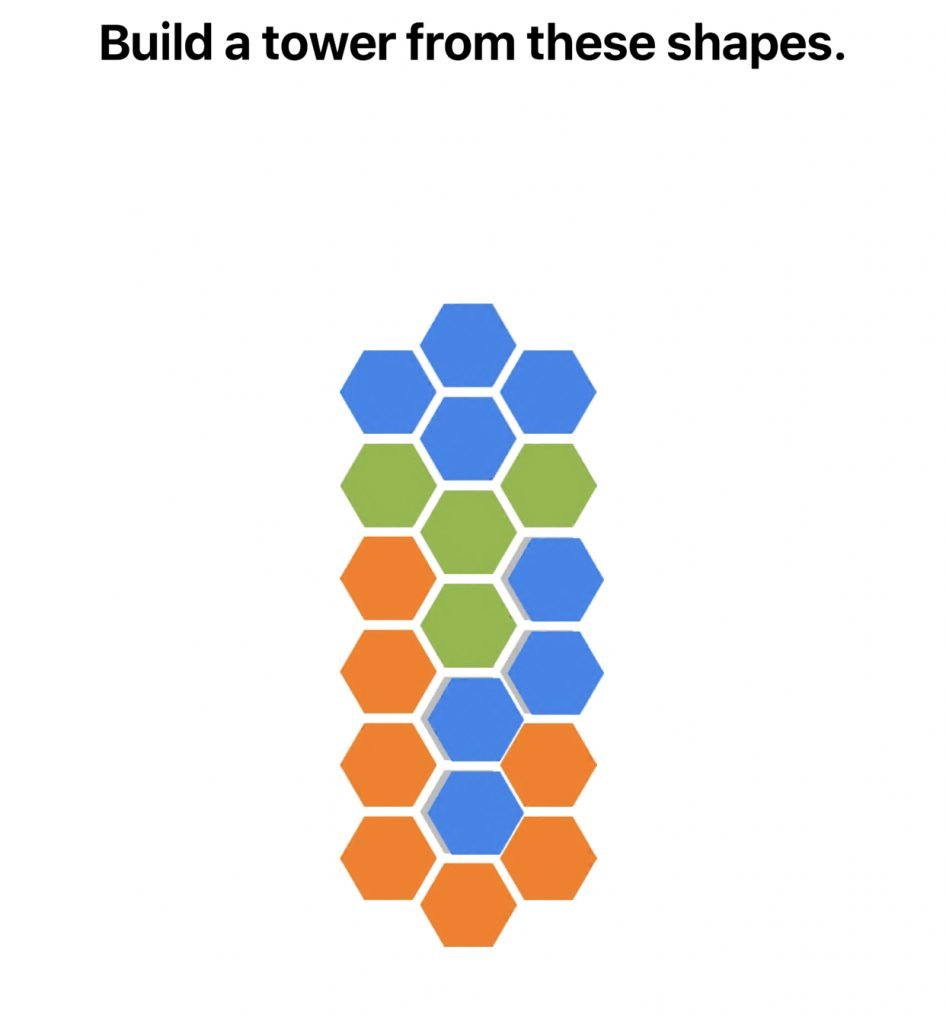 Level 28: To lift the kettlebell, tap on the 50lb and rewrite the number as 0 to make it 0lb, then lift it with one finger.

Level 29: To cool off, use your finger to drag the sail from the reflection of the boat. Notice that it looks like a waffle cone. Take one of the clouds and put it on top of the waffle cone to make it into ice cream.

Level 30: Ten candles were burning in the room, and some of them were blown out. How many candles remained? The number of unlit candles is the number that remained (the number changes every time). The burning candles will eventually just turn into wax.

Level 31: To help the knitting lady again, hit Start and type ACBACBACB to continue the pattern all the way down. You want to tap the letter of the darker squares.

Level 33: The hint given identifies the safe code as 3_9 with the second number being unknown. So try everything between 309 and 399. 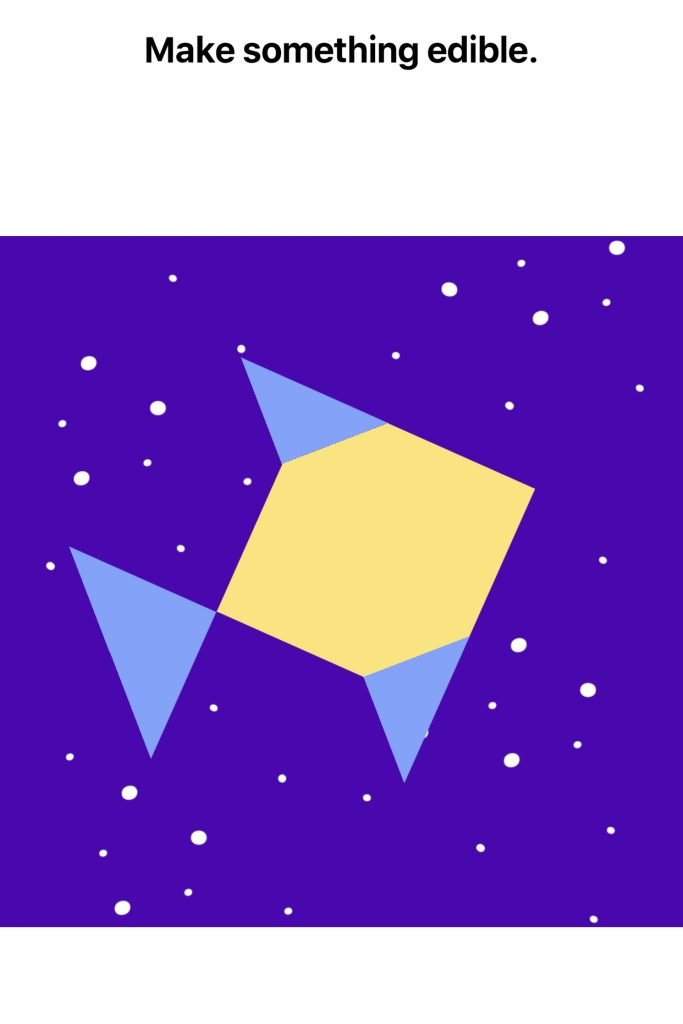 Level 37: To heal the frog, give it the top left (yellow) and bottom right (blue) pills at the same time using two fingers.

Level 38: To select all of the cubes, tap all six of them, then turn your phone over and another one will appear in the middle. Tap the one that appears.

Level 39: Just do exactly what the barbarian tells you to do in order to complete this level.

Level 40: To pick up the coin, turn the phone upside down and walk the snail across the top of the screen.

Level 42: To turn on the light, put your fingers on the two broken wires and then tap on the middle light switch with a third finger.

Level 43: Where is the camera looking from? It’s looking from the top left corner, so move it there and then adjust it little by little until you pass.

Level 44: What is the missing number? Turn your phone upside down to find out. It’s 87.

Level 47: You can split the moon into up to six parts by making two cuts. You don’t have to move the dotted lines, just type 6.

Level 48: To put watermelon on each table, take the word watermelon out of the question and put it onto the empty table.

Level 49: To make a matching key, switch the machine over to 4 and cut it, then switch it over to 1 and cut the key again. Then use the key to open the lock.

Level 50: Count all of the possible triangles, including ones that contain two or more pieces. There are a total of 15 triangles.

Level 52: How many letters have you received? Take the flag from below the mailbox, put it on the mailbox, then tap the mailbox to open it again. Count all of the letters inside plus the ones on the ground. The total letters is 8.

Level 53: The artist forgot his paint, so to help him, merge the left cloud with the right cloud, revealing the sun. Tap and hold the right cloud to make it rain and a rainbow appear. Then drag the palette up to the rainbow to fill it with colors.

Level 55: To find the strange dice, look for the dice that has seven dots in an H pattern on it. Or just tap around randomly until you find it. This is what it looks like: 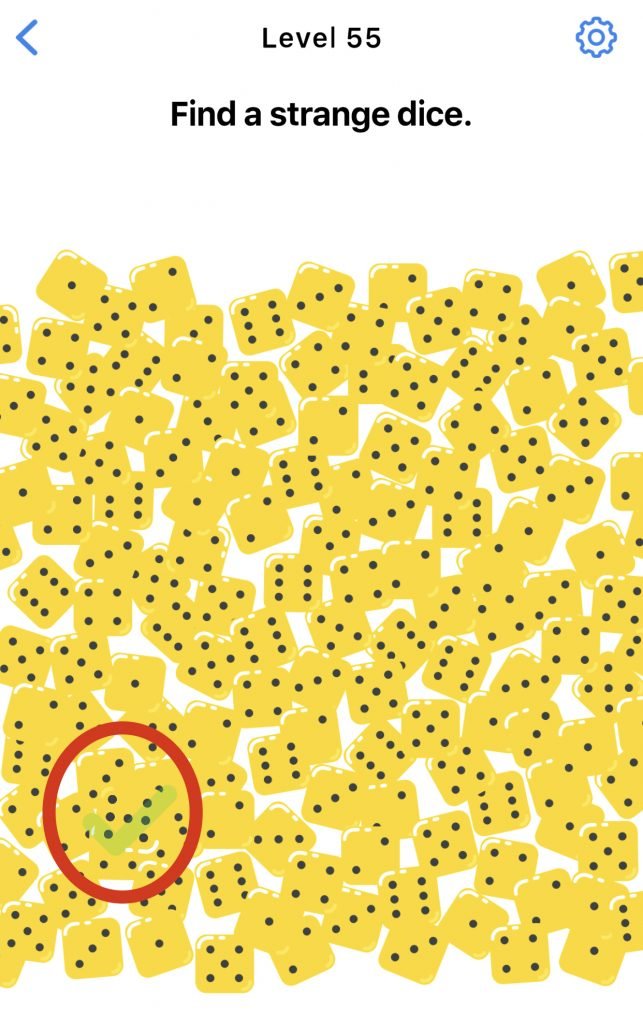 Level 56: To wake up the elephant, put your finger over the end of its trunk and hold it there until it wakes up.

Level 57: To awaken the volcano, put your finger over the mouth of the volcano, then shake your phone to cause an explosion.

Level 59: To close the image, move the cloud to reveal the sun. Move the sun to the top right corner of the picture, then drag the red X from the middle of the windmill to the sun, then tap the X to close it.

Level 63: To make a triangle, drag the sideways diamond halfway off of the screen to turn it into a rectangle.

Level 67: To pop all of the balloons, put them up against the word “pop” in the question to pop them all. 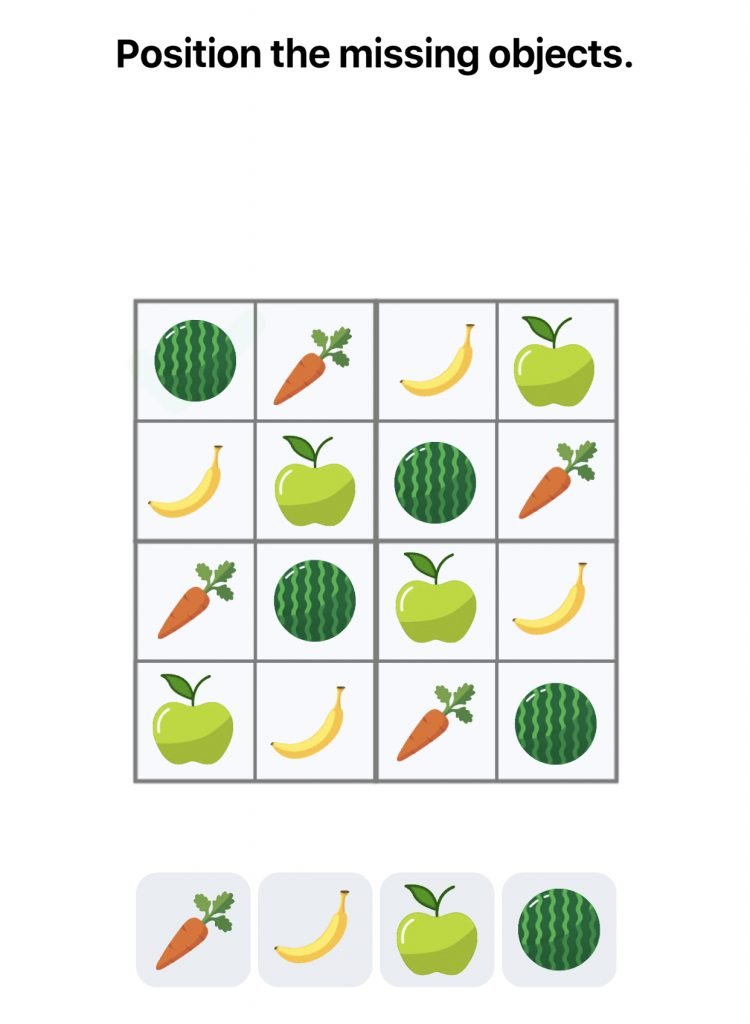 Level 70: To get to both houses at the same time, tap the + symbol on the ambulance to duplicate it. Then use two fingers at a time to take them to both houses.

Level 71: How many watermelons are there? Count the missing slices. There are five total watermelons.

Level 73: To find the correct door on the first try, put the candle in front of the doors until it starts blowing diagonally. When it does start blowing that way, open the door that the candle is in front of.

Level 74: How many numbers can you see? Add up all of the dark numbers to get the answer, 66.

Level 75: To find a fish, turn the phone upside down, then tap the fish that falls out of the bucket.

Level 76: The three wrong cards are the 11 of Spades, the queen of Hearts, and the black ace of diamonds.

Level 77: To catch a fish, wait until the lure float starts shaking, then pull up on it with your finger.

Level 78: To stop when the sequence is shown, just watch the numbers and hit stop after the number sequence plays that matches what’s on the phone.

Level 80: Put the floor T-shapes in symmetrically, like this: 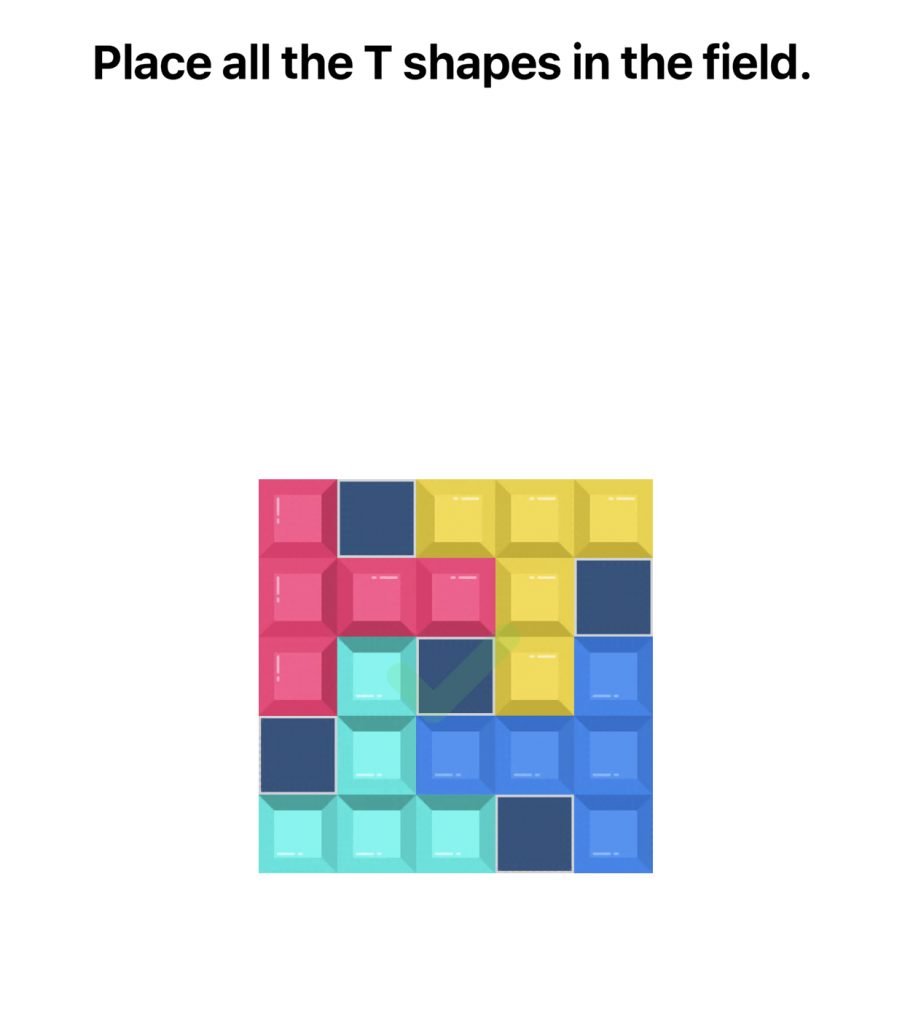 Level 81: To count 15 seconds, flip the big hourglass one and the small hourglass twice.

Level 82: Watch out, the eagle is near! Put your thumb over the small bird for about five seconds to hide it from the eagle.

Level 83: To score 12 with the dice, put your finger on one dice and shake it until it hits six. Then do the same with the other one.

Level 84: To help the ant get home, Hold the rock with one finger and lift the ant over it with another finger.

Level 86: To find number 9, simply tap on the number 9 in the question.

Level 88: To destroy the fortress, zoom in on the last cannonball to make it huge so that it will take out the fortress.

Level 90: To find something that cannot be bought, hold your finger on the egg and a chicken will hatch out.

Level 92: Which glass has the most water? Use your finger to pull the items out of the glasses, then pick the one with the most water.

Level 93: What will the size of the angle become? 30 still, magnifying glasses don’t change angles.

Level 94: To get rid of the troublesome fleas, hold down one finger to attract them, then use another finger to smash them.

Level 96: a rabbit can pick two carrots every minute. How many can it pick from this field in ten minutes? Zero because there are no carrots.

Level 97: To reach the exit, move the snail onto the words “the exit” in the question.

Level 98: To find the right eggshell to match, move the screen to the right to find eggshell 1 and then tap on it.

Level 99: To grow a tree, enter Sun, Water, and Fertilizer into the three cells, since these are needed to grow a tree.