Level 1: To find the different one, start moving around all of the avocados until you find the one with the gray seed, then tap on that one.

Level 2: To find the largest hamster, add all of the hamsters together by dragging them on top of each other to merge them and make a giant hamster, then tap on it.

Level 3: What’s the number under the parked car? Move the car out of the way by dragging it with your finger and the number will be underneath it. Turn your phone upside down to see it.

Level 4: To write down the correct answer, ignore all of the other equations in the question and solve 4+5 as normal. 4+5=9.

Level 5: To find the darkest color on the screen, tap on the question itself, which is written in black font.

Level 6: No smoking. To follow that rule, tap on the burning end of the cigarette with your finger and it will go out.

Level 8: What is the minimum amount of cuts needed to cut a circle into 8 parts? 1 cut, because the circle can be folded.

Level 9: To tap the frog above the texts, move the question below the frog by dragging it with a finger, then tap the frog.

Level 14: To find the chick, pick up the chickens and shake them up and down with your finger until the chick falls out of one of them.

Level 16: To help the baby fall asleep, rock the phone as if you were rocking a baby, and it will fall asleep.

Level 19: To correct the direction, make sure that your phone’s rotation lock is off, then turn the phone 90 degrees to the right so the arrows point in the stated directions.

Level 21: To release the “dolphin” (narwhal), expand the hole below the net by zooming in on it with two fingers, then tap on the ring side of the scissors to cut the net.

Level 22: Lucky or unlucky? Drag the two buttons together to change them into “Lucky and unlucky” in one button, then tap it.

Level 24: To select six watermelons, tap on the text that says “pear” and when the text box comes up, change it to “watermelon”. Then tap the other five.

Level 25: To count the triangles, count all of the ones that include other triangles inside of them, too. There are 15 total triangles in the shape.

Level 26: Which shapes has the most sides? The circle, because it has infinite sides.

Level 27: To position the missing objects, make sure that there is not duplicate objects in each row or column. Play it like Sudoku. Make it look like the following picture:

Level 29: To find the green frog, merge the blue and the yellow frogs together to make it into a green frog, then tap on it.

Level 30: Which claw is similar to the cat’s outstretched claw? Tap on the cat’s other claw (the one that is holding the fish).

Level 32: To put the shapes into the right frame, put the blue rectangle into the top outline, where the orange fractal also goes.

Level 33: To eat cheese again, drag the question down between the two platforms and then move the mouse across with the arrows.

Level 34: To make the smallest number possible, drag the left underscore up to turn it into a negative sign, then type 999 to make -999.

Level 35: Mom is back, help me hide the gamepad! Put your finger on the screen on top of the gamepad for about 10 seconds in a row.

Level 36: To help little bat fall asleep, hang the phone upside down. Make sure the rotation lock is off.

Level 38: To kill the midge (mosquito), put one finger on the screen to draw it over, then smash it with the other finger when it stops moving.

Level 41: Which chest contains gold? Drag the word “gold” out of the question and put it underneath (not on top of) ny one of the chests.

Level 43: How many ice creams are below? Move all of them out of the way to reveal the real number of ice cream that there is.

Level 45: To find something that you can’t eat, drag the nest out from underneath the eggs, then tap on the nest. (NOTE: If the game doesn’t advance to the next level, turn it off and then back on again)

Level 46: To find the number 8, tap on the 8 in the upper right corner of the picture. Use this picture as a guide: 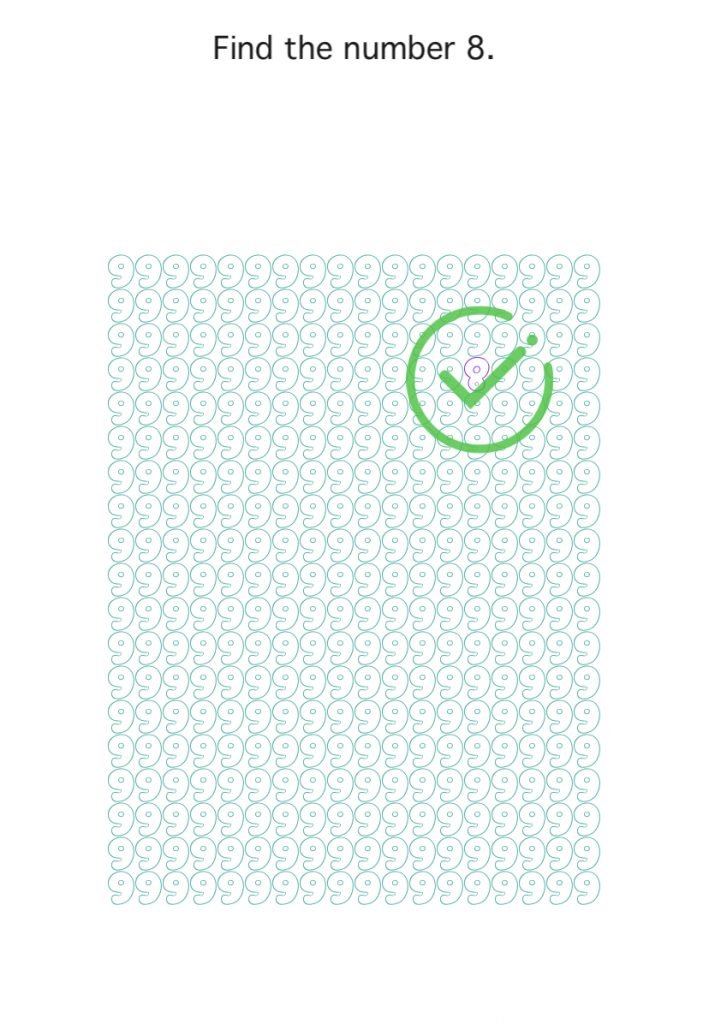 Level 47: To activate the hourglass, hold the glass with one finger, then turn your phone upside down to activate it.

Level 48: To pop the balloons, drag all of the balloons to the top left corner of the question, and push them against the word “pop”.

Level 50: To find the mother hen, zoom out on the screen and it will be to the bottom right corner off of the screen.

Level 52: Catch all of the falling oranges, but don’t catch the rising oranges.

Level 53: Ignore the direction of the arrow and the slide track, and literally slide left to unlock.

Level 54: To make a triangle, drag the diamond partially off of the screen to the left.

Level 57: We need 9 tomatoes. There are six tomatoes on the screen, so flip the 9 over to make it into a 6 and then put the six tomatoes in the bowl.

Stay tuned for the rest of the answers to Tricky Brain Challenge!