We will also go over the statistical evolutions that you can find in the far right area of the lower menu.

Read on for a full multi-part guide and list of weapons and their evolutions, skill weapon evolutions, statistical evolutions, and what they do and how they differ from the original skill in Survivor!.io!

Football/Soccer Ball: this evolves into the Quantum Ball. The method of attack is very similar to the soccer ball, except there are more of them and they do more damage. You need Sports Shoes/Sneakers in order to get this evolution.

Brick: This evolves into the Dumbbell. The Dumbbell shoots out in a circular pattern from your character, eight at a time, and does significant damage. You need the Fitness Guide for this evo.

Type-A Drone and Type-B Drone: These evolve into the Destroyer, which shoots massive amounts of missiles into multiple directions. These require no green skills to evolve, and when you evolve them, you empty a weapon slot. You must have both of these in order to do the evolution.

RPG: You need the HE Fuel to unlock the ability to evolve this into the Sharkmaw Gun. The Sharkmaw Gun acts similarly to the RPG, but with a wider area of effect and a different look. Plus, the missiles do an absolutely MASSIVE amount of damage, making this especially effective against bosses. 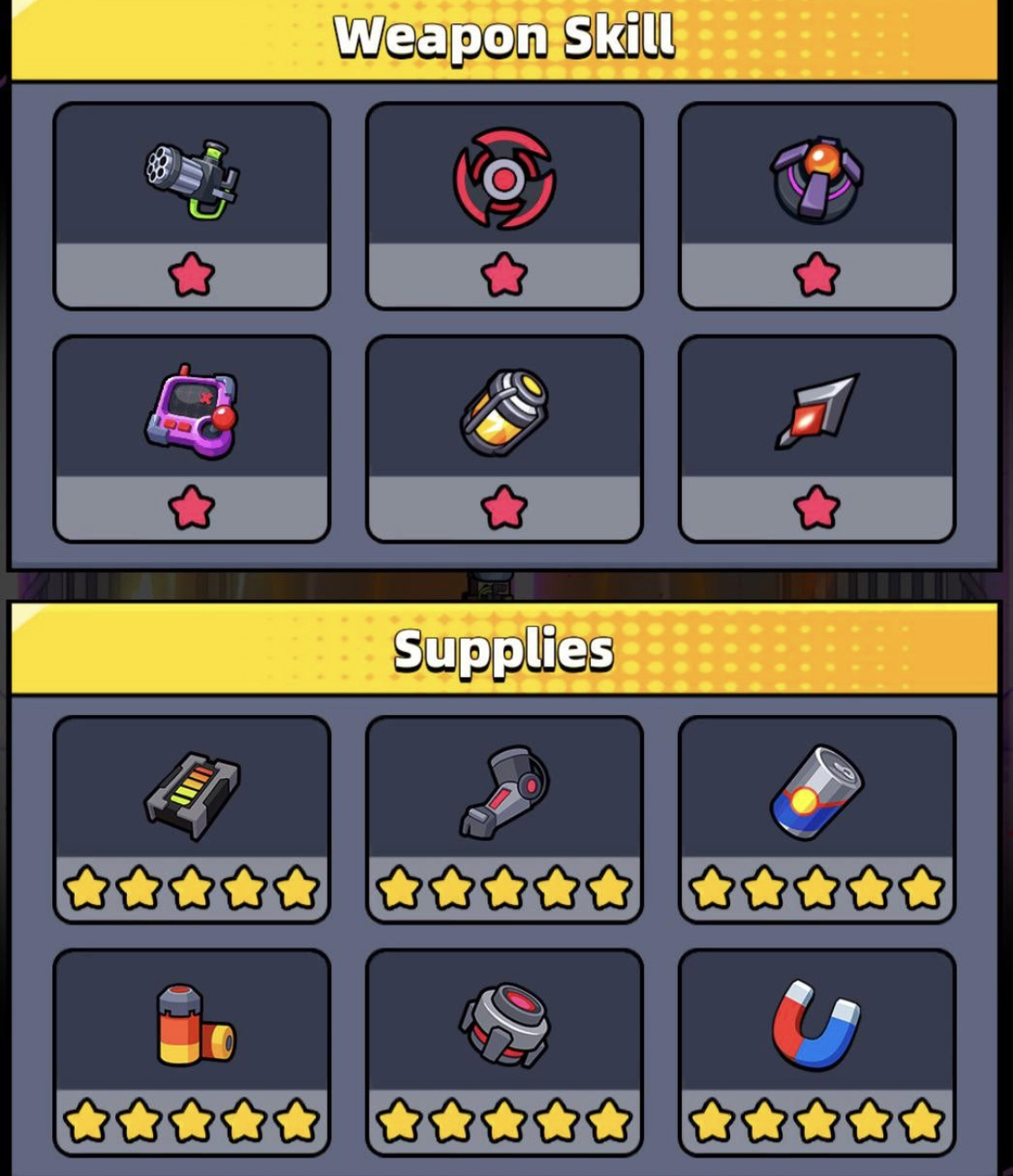 Guardian: Requires the Exo-bracer to evolve into the Defender. The Defender is simply a color swapped version of the Guardian, with larger blades and more damage. However, it also has the added bonus of stopping bullets. 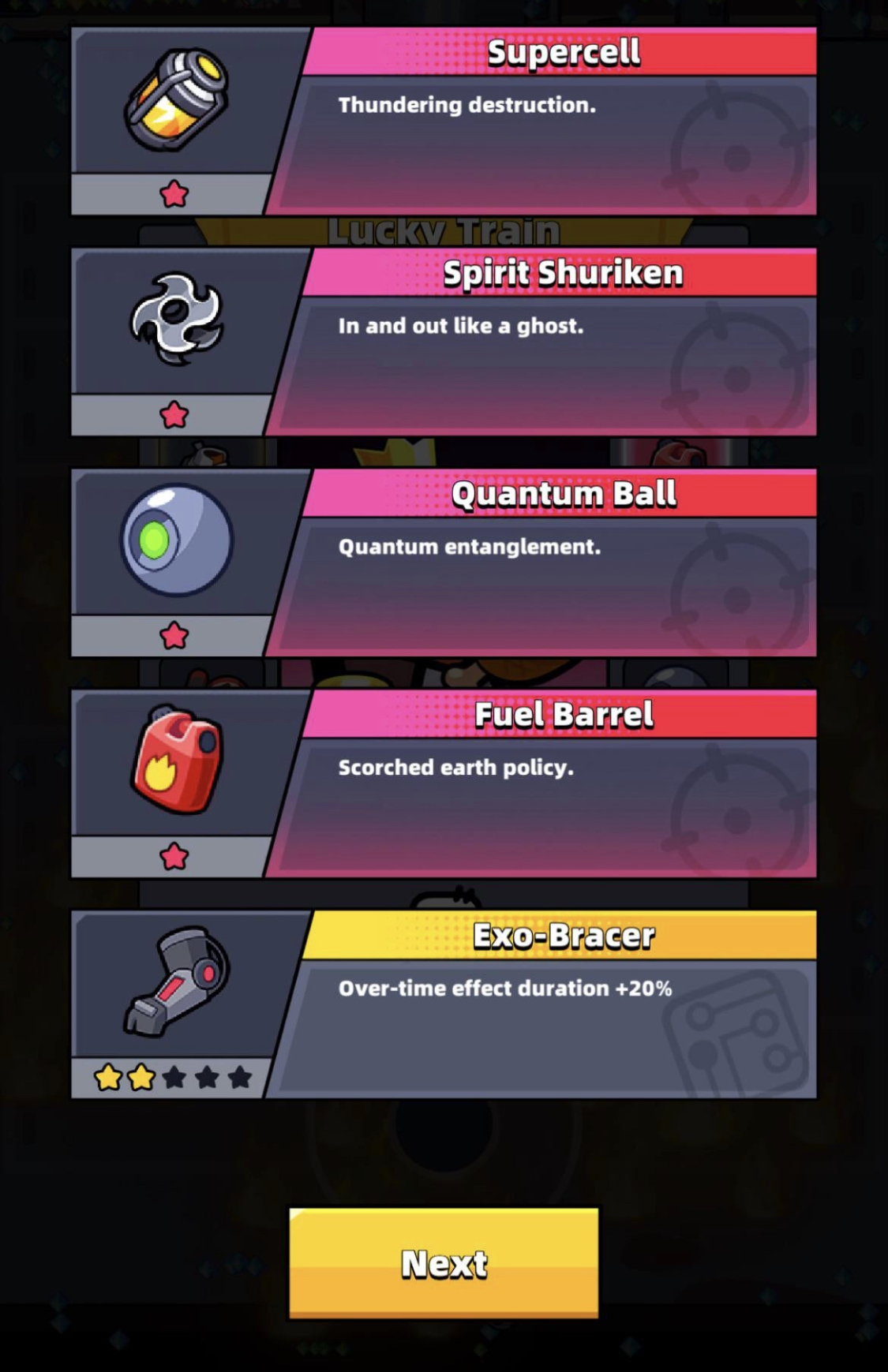 Lightning Emitter: Requires the Energy Cube to evolve into the Supercell. The Supercell deals more damage and has a larger area of effect. Due to the considerable amount of damage and the auto-targeting, the Supercell is considered especially effective against bosses.

Durian: The Durian requires HE Fuel to evolve into the caltrop. The Caltrop bounces diagonally around the screen in a similar manner to the Durian, but it also shoot out a number of less powerful missiles constantly in a circular manner.

Laser Launcher: The Laser Launcher requires the Energy Cube to evolve into the Death Ray, which shoots outward in a spiraling, circular motion from your character, and it does far more damage than the original weapon did.

Molotov Cocktail: Requires the Oil Bonds to evolve into the Fuel Barrel. The Fuel Barrel does more damage and has a larger area of effect compared to the original Molotov.

Drill Shot: Evolves into the Whistling Arrow. In order to do this evolution, you need to have the Ammo Thruster. The Whistling Arrow Spirals outward to have a time from your character and it’s anything in its path with heavy damage.

Boomerang: Requires the High Power Magnet to evolve into the Magnetic Dart. The Magnetic Dart spirals outward from your character to do damage to a wide swath of enemies. 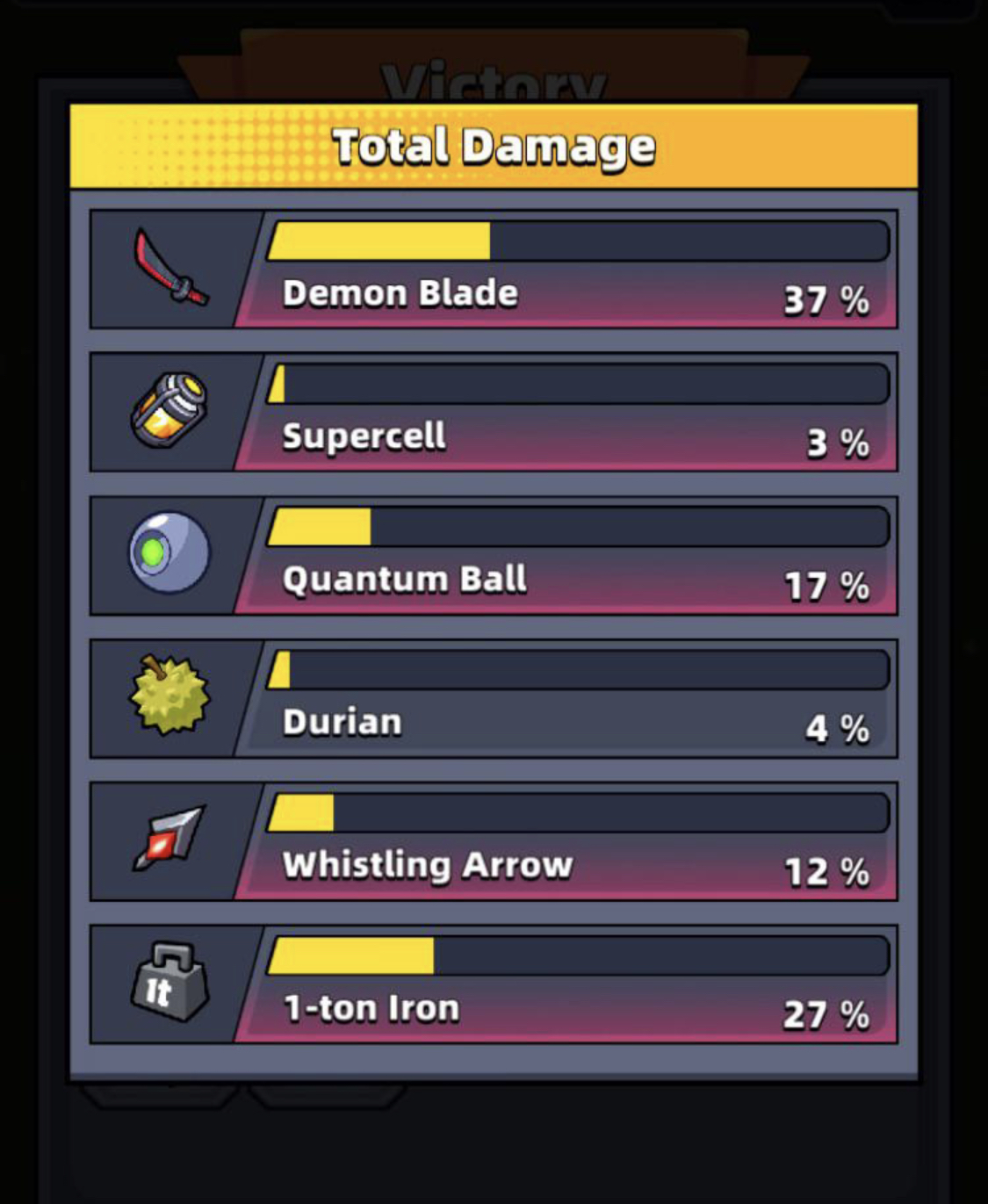 Baseball Bat: Requires the Fitness Guide and evolves into Lucille.

Shotgun: Requires the Hi Power Bullet to evolve into the Gatling Gun.

Revolver: Requires the Hi Power Bullet to evolve into the Reaper.

Lightchaser: Requires the Ronin Oyoroi to evolve into the Eternal Light.