BitLife: Life Simulator used to have very few features in the prison and jail, but since the August 2019 update, there has been a full slate of features added. Now you can do more than just start a prison riot or attempt to escape.

Read on for a full guide on life in jail or prison in BitLife: Life Simulator!

The first thing to know is how to get to jail or prison. All that you have to do is commit a crime and get caught. You can get sent to different types of prison now. There’s minimum and medium security prisons, as well as maximum security prisons. 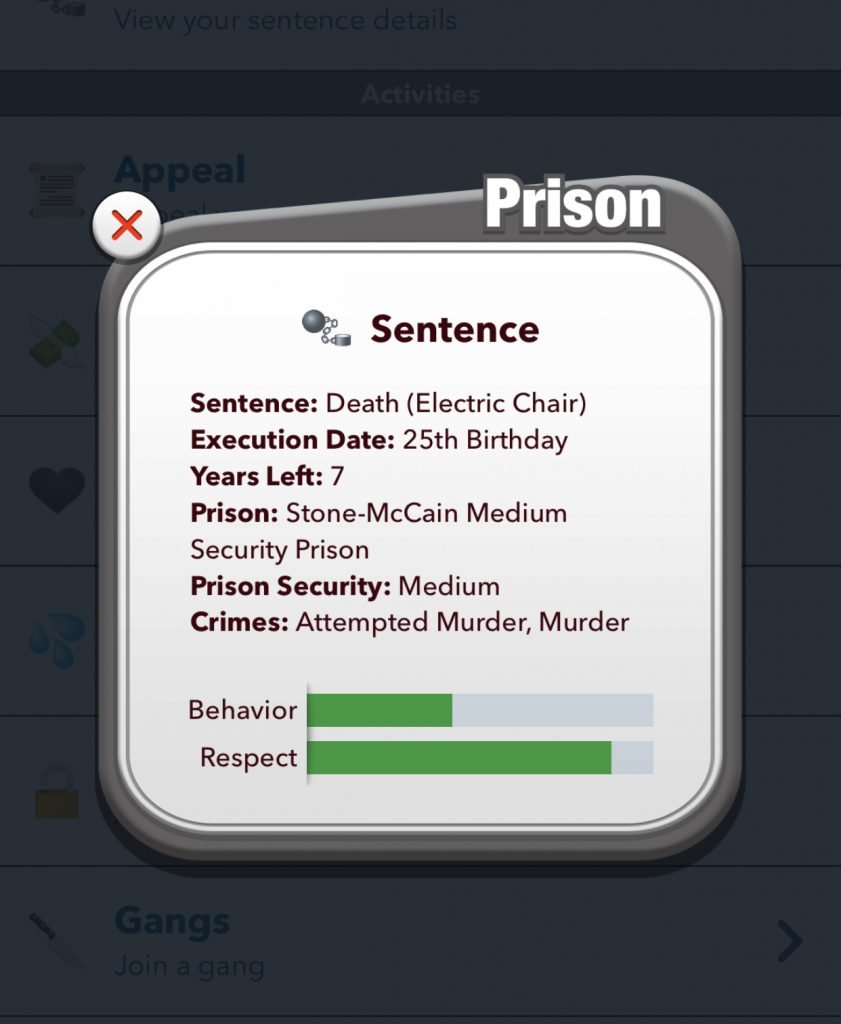 To get sent to minimum or medium security, commit fairly small-time crimes, like burglary. But to get sent to maximum security prison, do something serious like commit a murder. Or also, escape and then get caught again. 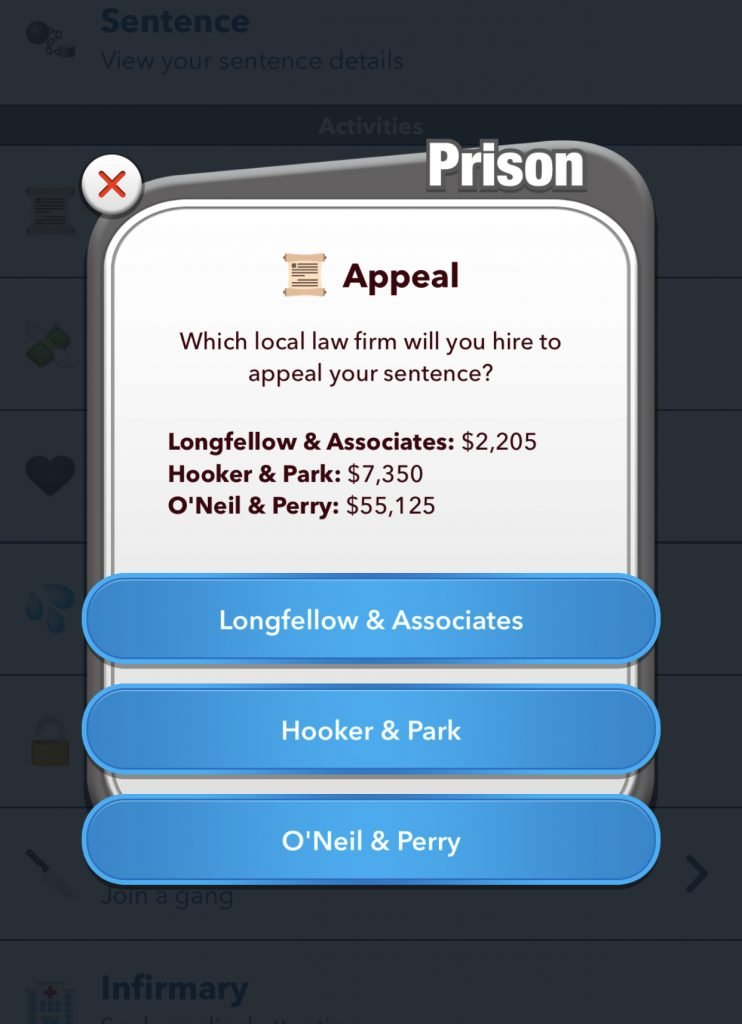 You can appeal your sentence, just like you could before. To do this, though, you will need money, so you’ll have to have had some sort of savings from before. Hiring lawyers will cost some money, and it’s more money than a prison job will be able to get you. 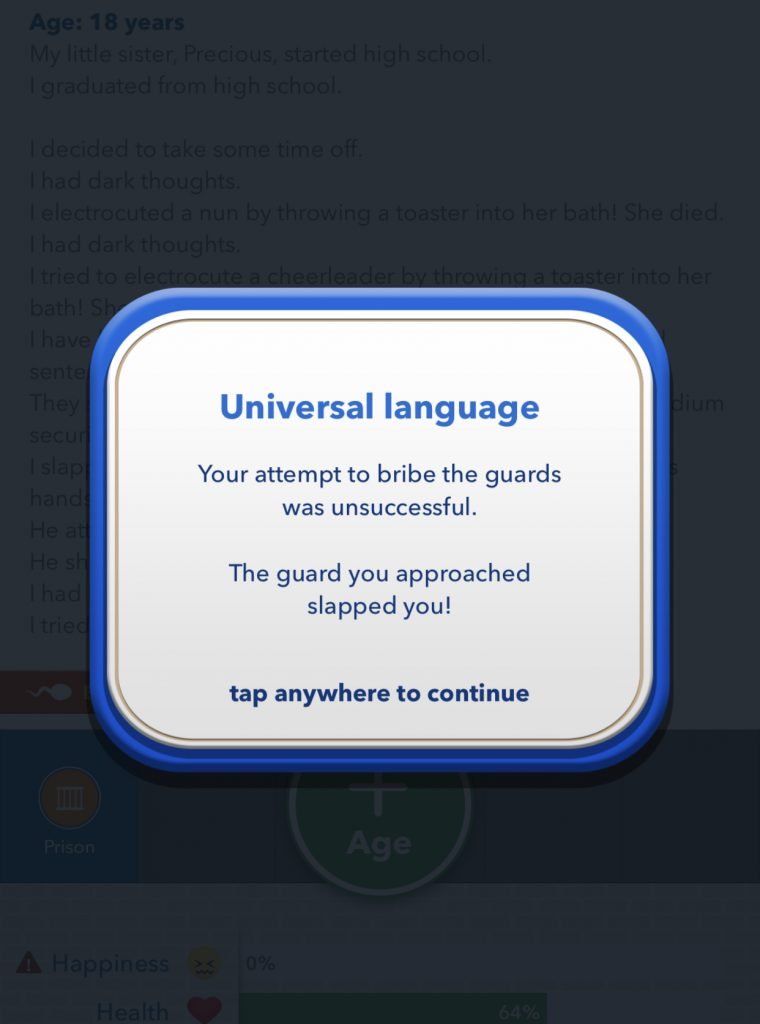 The conjugal visit option can only be arranged if you already have a boyfriend/girlfriend or a spouse. If you don’t, the option will be grayed out. If you do, you can arrange a conjugal visit, which will not only increase your happiness, but will also help sustain the relationship until you get out of jail.

The cry option is a surprisingly effective one for managing your health and happiness. While crying in prison sounds absolutely ridiculous, oftentimes other prisoners will comfort you. Your happiness will increase significantly, and your health will increase a little bit. 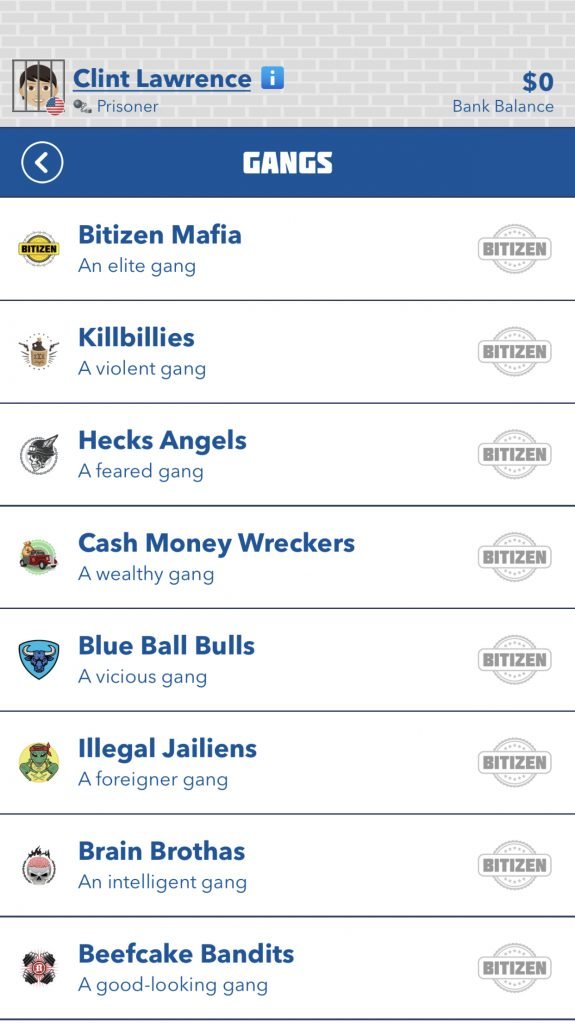 Gangs might or might not be in your prison depending on where you are. The higher the security of the prison, the higher the chance of gangs. You can try to join a gang, and either you will get rejected and beat up, damaging your health and happiness, or you will get accepted, thereby increasing your happiness. 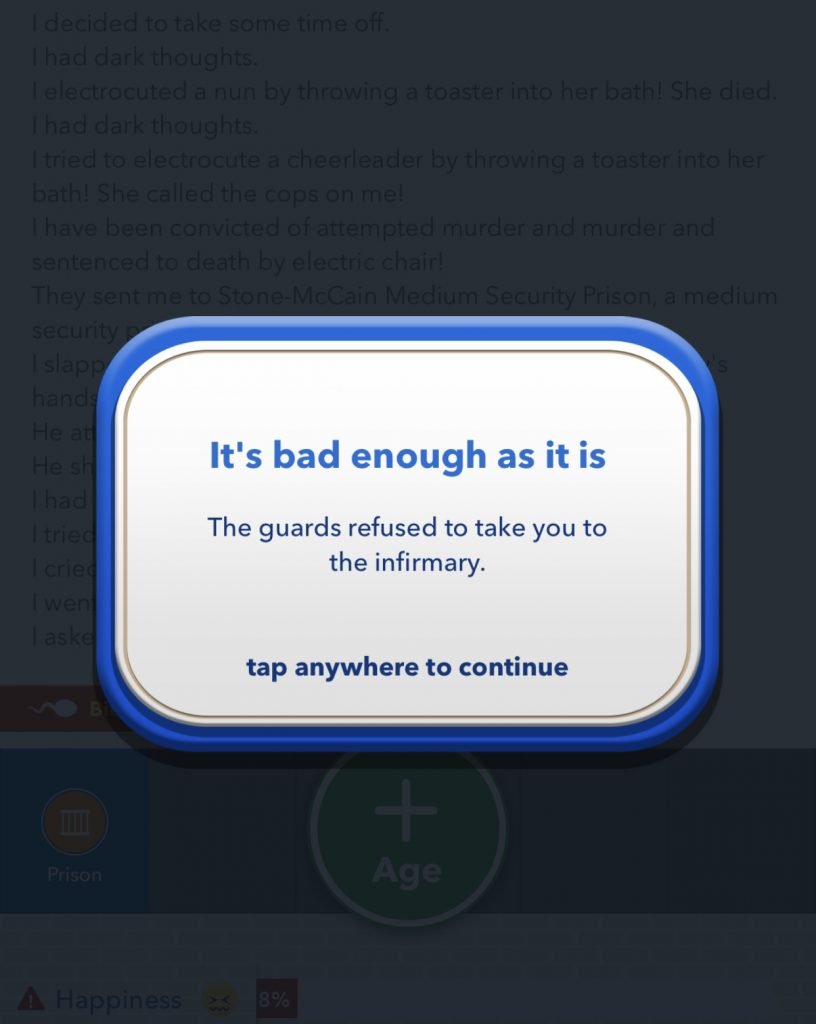 The Infirmary is where you can go if you are sick. You can choose to either ask the guards politely to go, or you can demand it. Demanding it will typically get you rejected. Asking politely will usually get you sent to the infirmary, especially if you have a bad disease, such as cancer.

Once you’re there, it’s just like the doctor’s office in the civilian world. You can either come out healed or not healed. If you’re not healed, age one year and then try again later. Keep trying until you are healed. 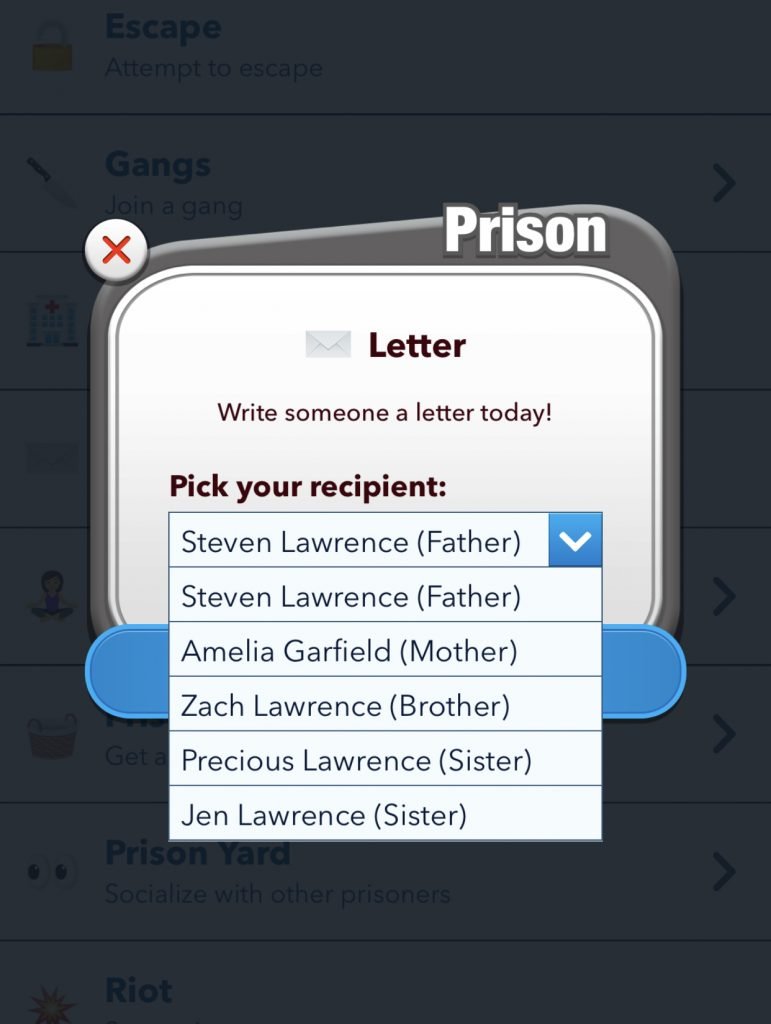 Letters allows you to write a letter to someone from your cell. This is another option that will significantly increase your happiness. If you get a reply back, your happiness will increase even further. 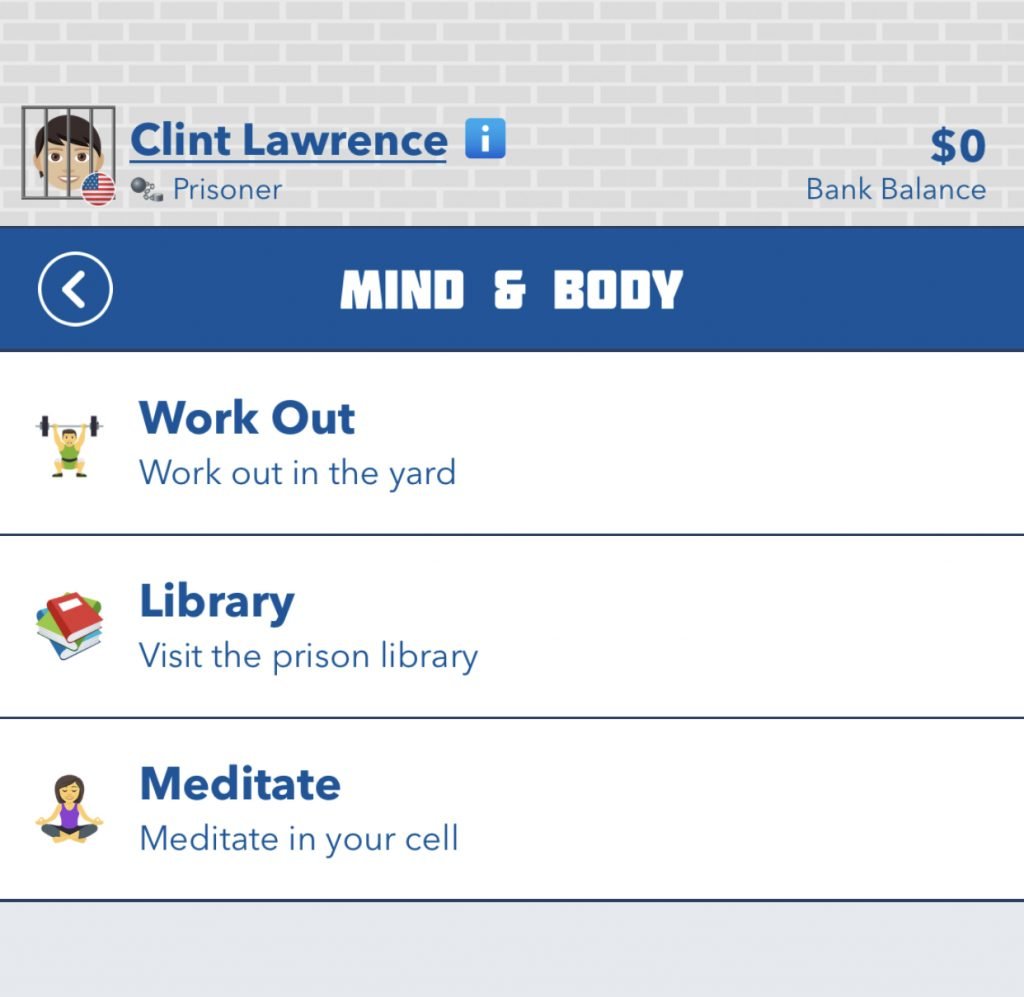 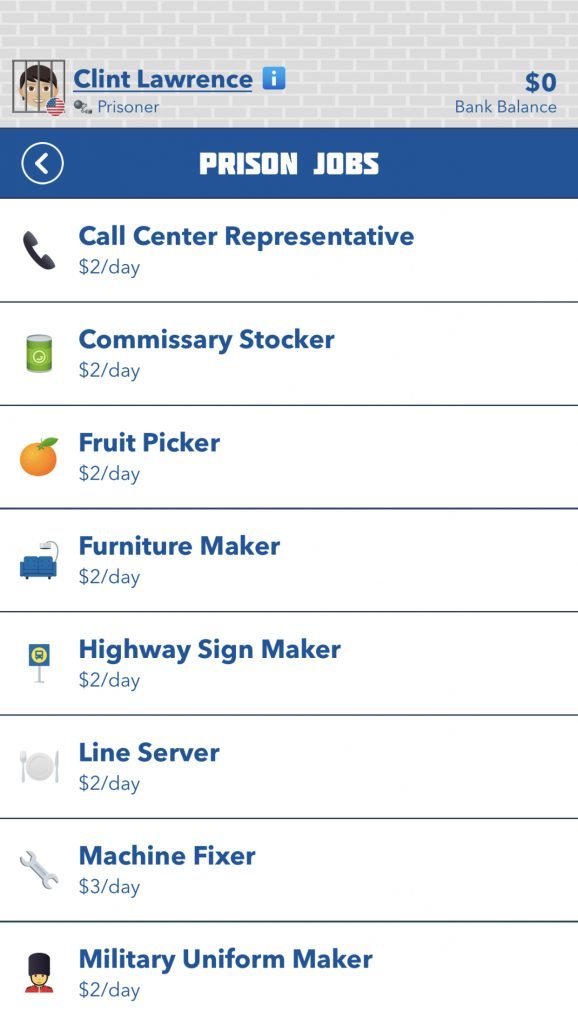 Prison Jobs generally allow you to earn two to three dollars per day. This totals out to either 830 or 1095 per year, approximately. That’s enough money to eventually buy you a good lawyer so that you can appeal your sentence and get released. Not only that, but your happiness will be effected in a positive way. 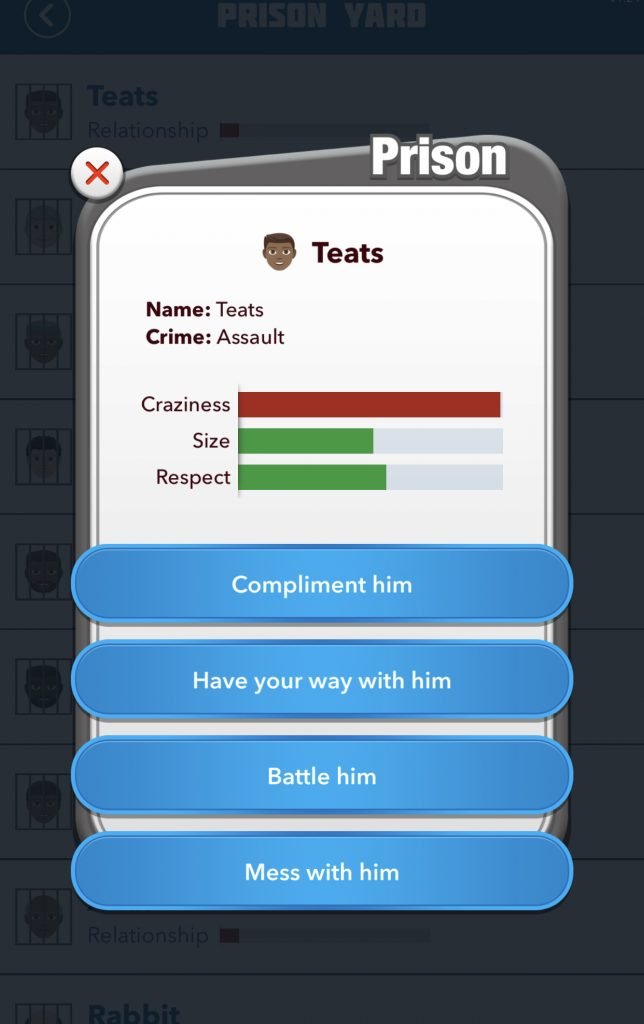 Prison Yard allows you to socialize with prisoners. There is currently not much good that comes from this. You have no relationship with them to begin with. Your options are to have your way with them, rumble/fight with them, mess with them, or compliment them.

Complimenting them has a slim chance of working, but if it does work, it will improve your relationship with them. The other three options have almost no positive results, and will likely leave you injured or dead if you choose to pursue them.

Riot allows you to start a prison riot, but this isn’t just a random occurrence like it used to be. Now there is an entire prison riot mini-game, where your goal is to gather enough prisoners to start a successful riot. If you succeed, you cause havoc. If you fail, you get a longer sentence.