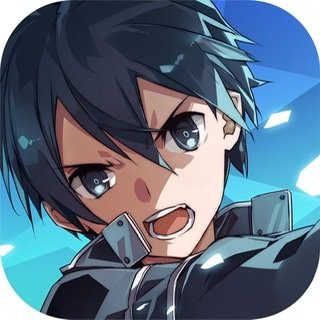 Crossing Void Global, also known as Dengeki Bunko: Crossing Void, is a wildly popular new gacha RPG based off of multiple anime storylines coming together. You have the story modes, which are available immediately, but there are a ton of other game modes that you can unlock as you make your way through the game

The Challenges, Guild Play, Fragment, Impression, Super Mode battles, and more, are all available, some very early in the game, and some much, MUCH later in the game. Knowing why you would want to unlock them is just as important as knowing how to unlock them. 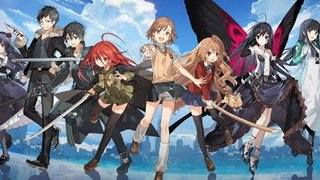 Read on for tips on how and why to unlock every single detail of the game in Crossing Void Global! 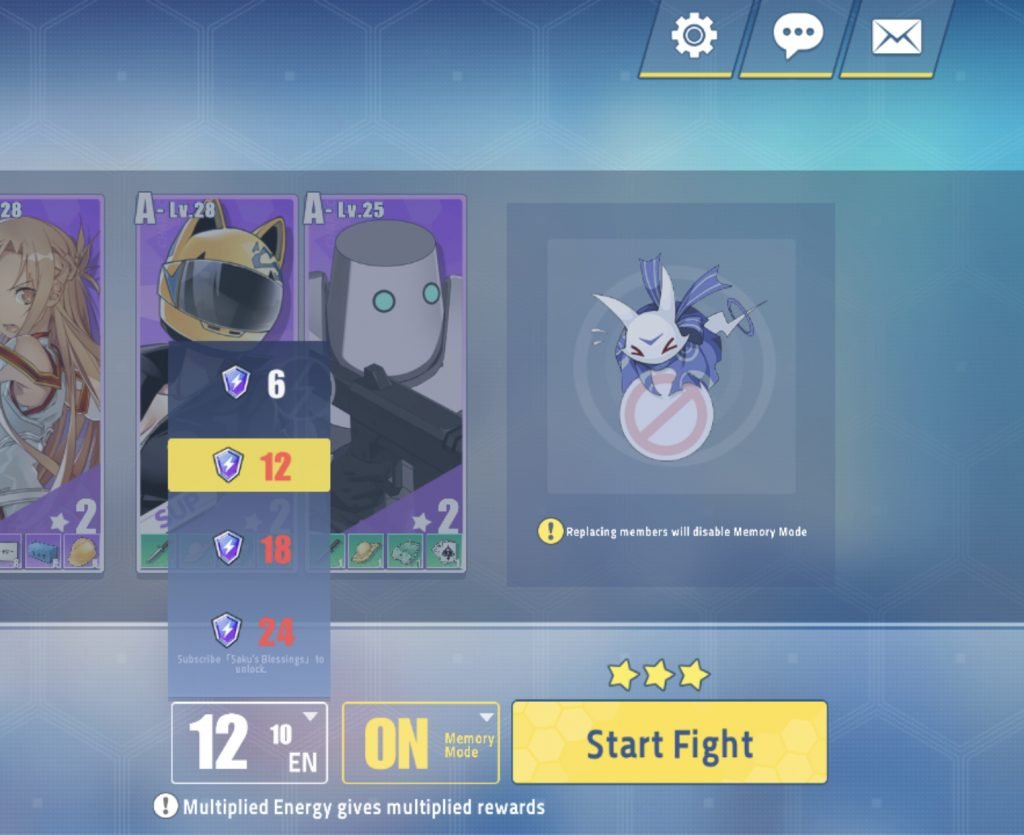 Unlocks at Level 10. Go to an old stage that you have at least two stars on, and tap on the energy counter before playing it.

Change the 6 energy to 12 or 18 energy (or 24 with the right subscription). Multiplied energy will give you multiplied rewards for beating a level.

Fragment Gacha opens up at level 30. You can also spend fragments in the Talent Shuffle or in the Character Exchange.

This is another Gacha option. Impression unlocks at Level 45, and allows you to unlock Impression Weapons in order to significantly increase your stats by equipping it in the Equip menu.

This doesn’t unlock at any particular level; Inherit actually unlocks if you get a rarer version of an identical character later on in the game. If you spend time upgrading B-grade character’s skills, star level, etc, then you get an S-grade version of the came character, use Inherit to give the upgrades from the B-grade to the S-grade character (or from C to A, or C to S, etc)

The Guild will unlock at level 23. This will allow you to either create or join a guild. Once you do so, you and your guild members will have special sets of quests, your own shop, guild vs guild battles, and other kinds of goodies and game modes to undertake. 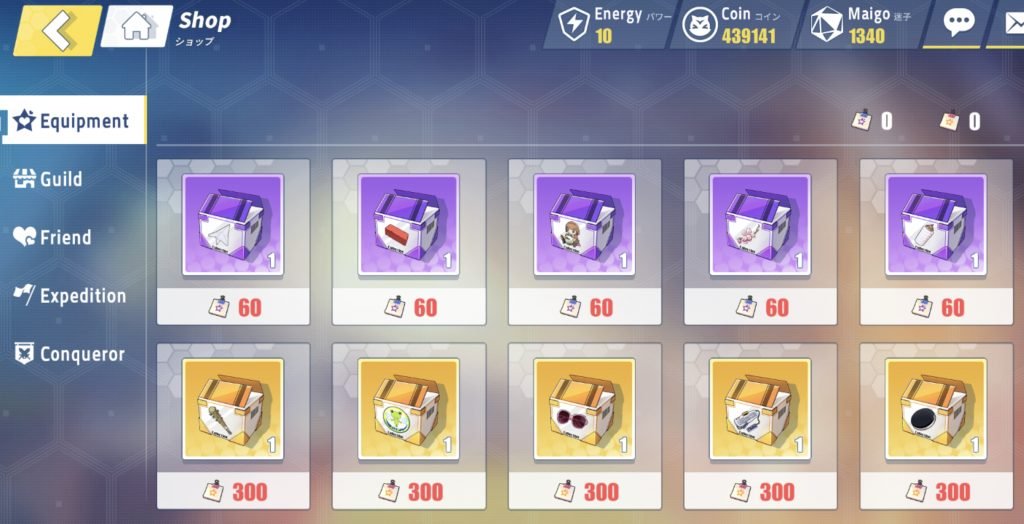 The Announcements (or Notices) will open at Level 12, which means that you’ll probably unlock them during the tutorial. It’s fairly self-evident – you’ll be able to go here to read all of the announcements put out by the developers. 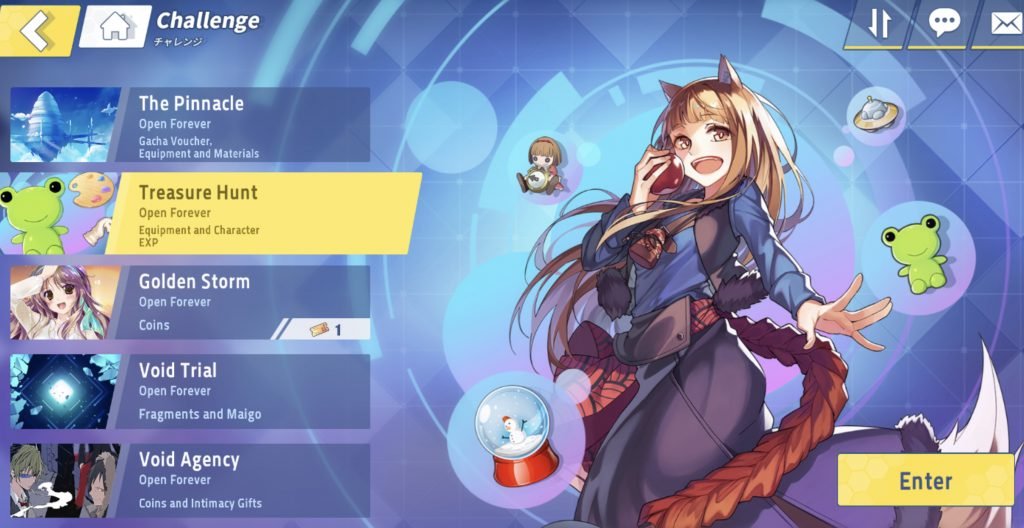 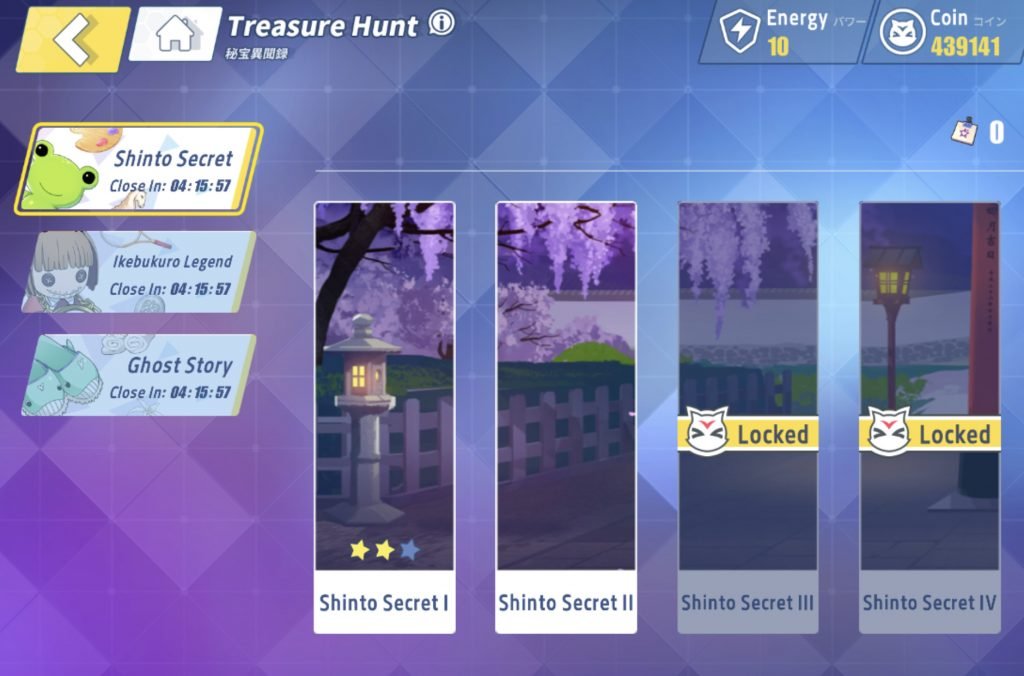 This is open as soon as you get the Challenge mode. You can go here to get Equipment as well as to get Character EXP. You can also get a ton of other rewards, such as Star-Up materials, equipment shop tickets, and others.

You can also gain Player EXP quickly because each battle is worth 12 energy and earns 12 experience. So on a Treasure Hunt stage that you beat with three stars, you can Super Mode it up to 36 energy and 36 experience.

The three Treasure Hunt areas are Shinto Secret, Ikebukuro Legend, and Ghost Story. Not all of the areas are open all of the time, but at least one of these areas is always open. The higher-level stages contain some of the rarest and most treasured items in the game, such as S-secret notes, which allow you to buy S-equipment in the store.

Go to the Pinnacle to get free Gacha vouchers, which can get you free turns at the Gacha, and a large number of other rewards such as coins, Maigo, event completions, and more. The Pinnacle unlocks at level 14.

It costs zero energy to right in the Pinnacle. Beat all floors and you will complete one phase, which, if you do, can earn you a LARGE quantity of Gacha vouchers.

The Void Expedition unlocks at Level 35. This is where you can pick up Expedition Coins, which can be spent on premium goods, such as tons of coins or high-level fragments and fragment-origins at the Expedition Coin Store.

This unlocks at level 16. You can go here to get lots and lots of coins, so if you are running out of the primary currency, hit the Golden Storm.

It doesn’t cost energy to fight here, but it does cost Golden Storm tickets. The only rewards here are gold coins although completing these levels can also lead to other missions and quests being completed. 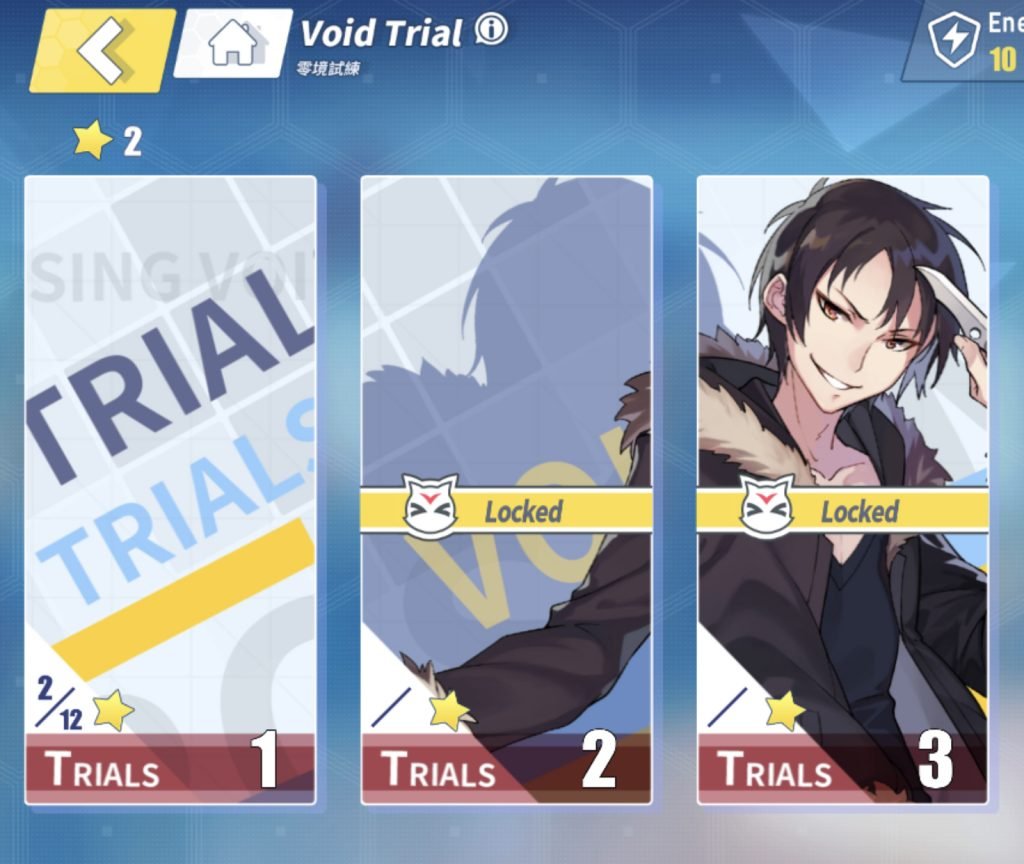 This one unlocks at level 18. Go here to fight for fragments, which can then be used in the Fragment Gacha, and to get Maigo, the premium currency of the game.

Void Trials are similar to the training missions in the Story mode, where you have to do one specific thing, such as dispel an enemy’s debuff. Complete all four trials to complete your training and to earn rewards for being that specific phase of trials. 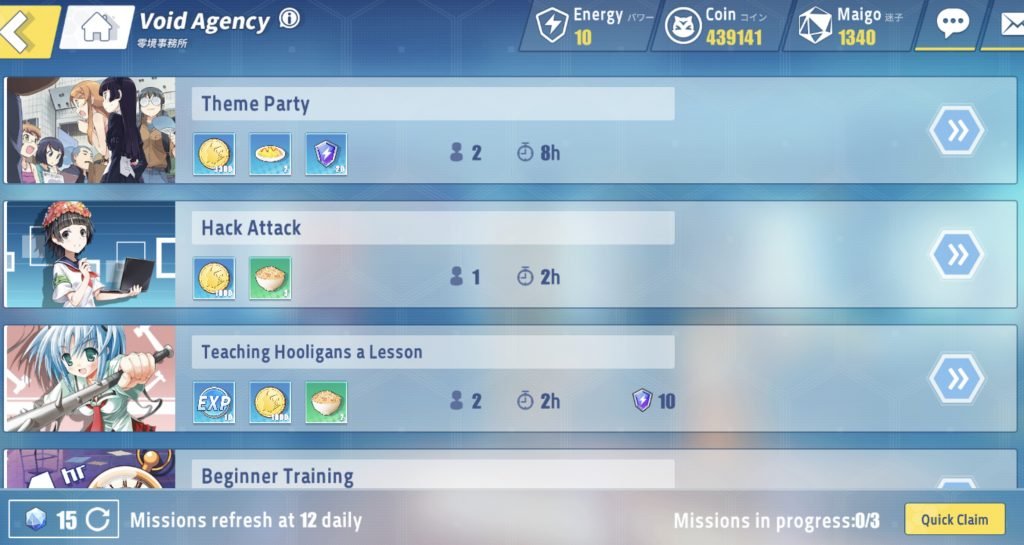 Opens up at level 20. Void Agency features a number of timed quests, which you can send a group of characters on for either two, four, or eight hours, in exchange for a number of rewards when they complete the quest.

You can send characters on up to three Agency quests at a time and win coins, Guild Popularity, energy, experience points, Maigo, and more goodies. You need the character availability, and each one requires a different set of characters to be sent out. You can either wait for the rewards to finish, or you can use accelerator items to speed up the missions. 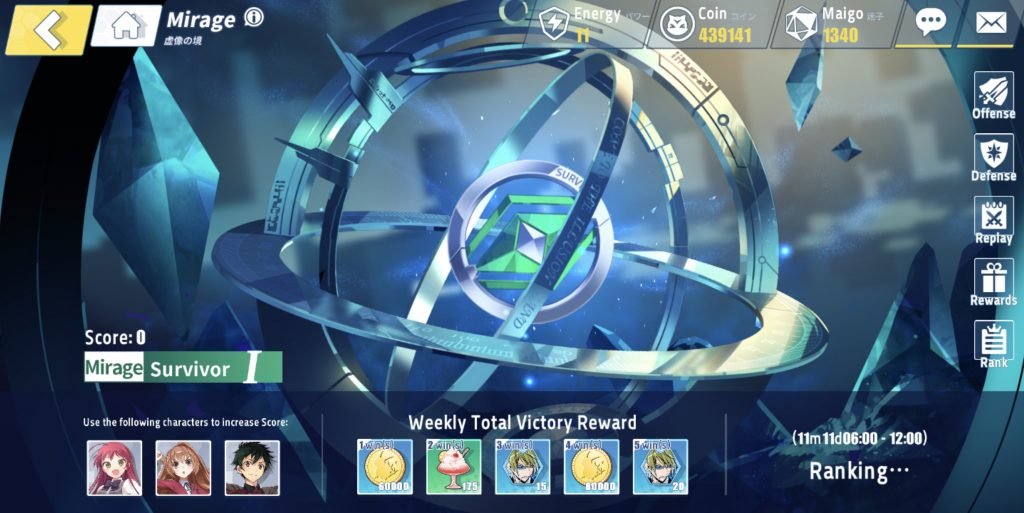 The Mirage will unlock at player level 23. Go here and you can win Coins, Fragments, and Equipment Experience in order to level up and upgrade your equipment. You can compete against other players in Offense and Defense for a limited number of battles.

This unlocks at level 28, and the only for two-hour periods daily. You can earn Fragment-Origins here for the Fragment Gacha store, and you can earn account experience here, making it easier to level up and unlock stuff.

Battles are standard here, and your goal is to get as many victories as possible before taking three losses. Each consecutive battle will be tougher than the previous one.

This unlocks at Level 30. You can go here to win Equipment and Character experience points. You’ll send two characters out, one main and one support, and you will be paired with two other players who also pick a team of two characters.

You and the other two players will go up against one boss combo (one main and one support) with huge amounts of power. Be sure to pay attention to the game so that you can attack when you have to because there is no auto-battle in this mode.

The Breaking Event unlocks at Level 32. You can get Coins and character EXP here, but expect more of it than in previous challenges due to the high level and high difficulty of the Breaking Event.

Related Posts:
Sponsored by: Acorns: Refer 4 friends and get $250 free.
Coinseed: Sign up and get $5 free.