BitLife: Life Simulator has a surprisingly in-depth military component to the game. Whatever country you come from, you can join that country’s military as an enlisted person right out of high school, rising to the rank of E9 and making it to a young retirement without even having to do college. 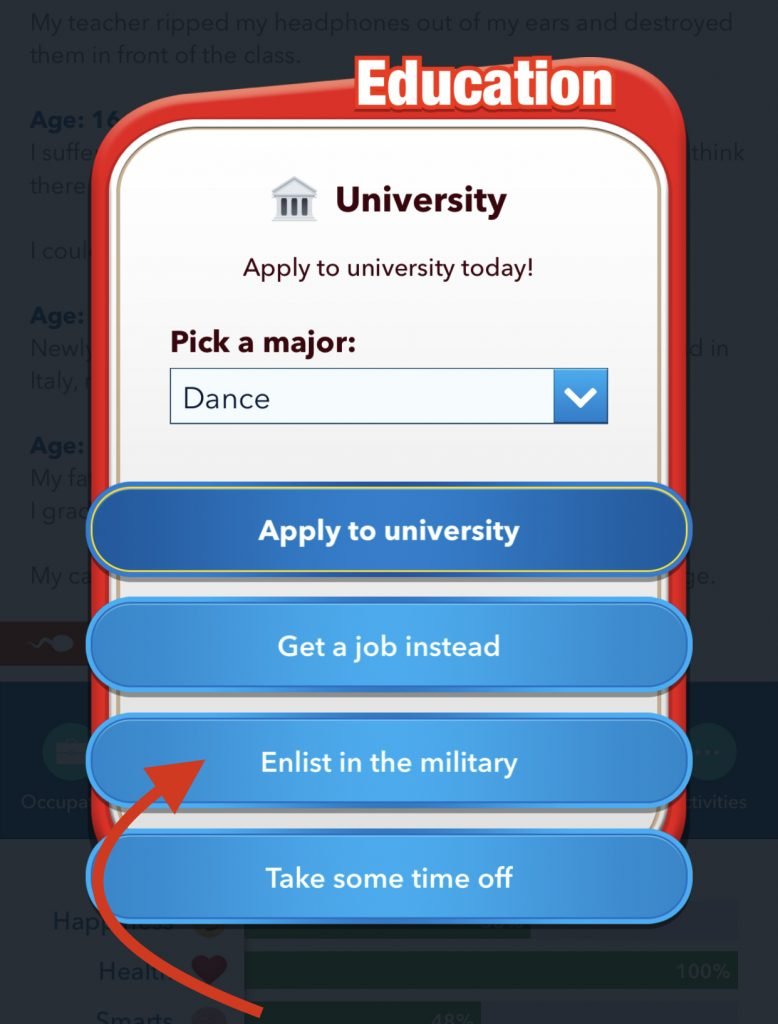 On the other side of the coin, you can also go to college, graduate, and then join one of the 4-6 branches of the military (depending on country) as an officer and get promoted all the way to General or Admiral – General if you are in the Army, Air Force, or Marines, or if you are in the Navy or Coast Guard of your country, you can become Admiral.

You can go Absent Without Leave, or AWOL, just like in the regular military, but obviously with less real-life consequences. You can unlock a new achievement this way, as well as take a dishonorable discharge for your work.

Read on for the full and complete military guide for BitLife: Life Simulator! 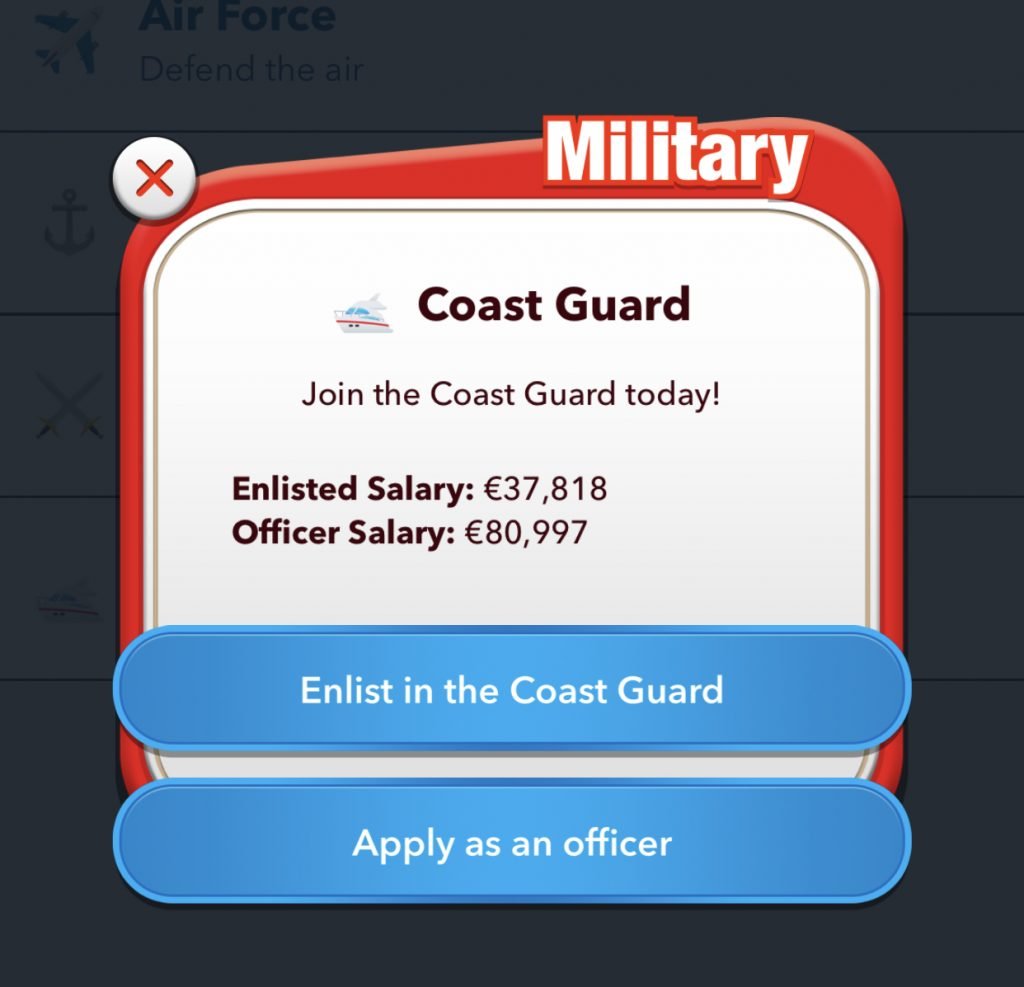 How to go Enlisted

Enlisting in the military is easy. Once you get out of high school, all that you have to do is pick the military as your job. You can pick either Army, Navy, Air Force, Marines, or Coast Guard, and your career will follow a similar trajectory. You can either enlist right when you graduate (or when you turn 18 if you graduate as a minor), or you can enlist whenever you want to afterwards. 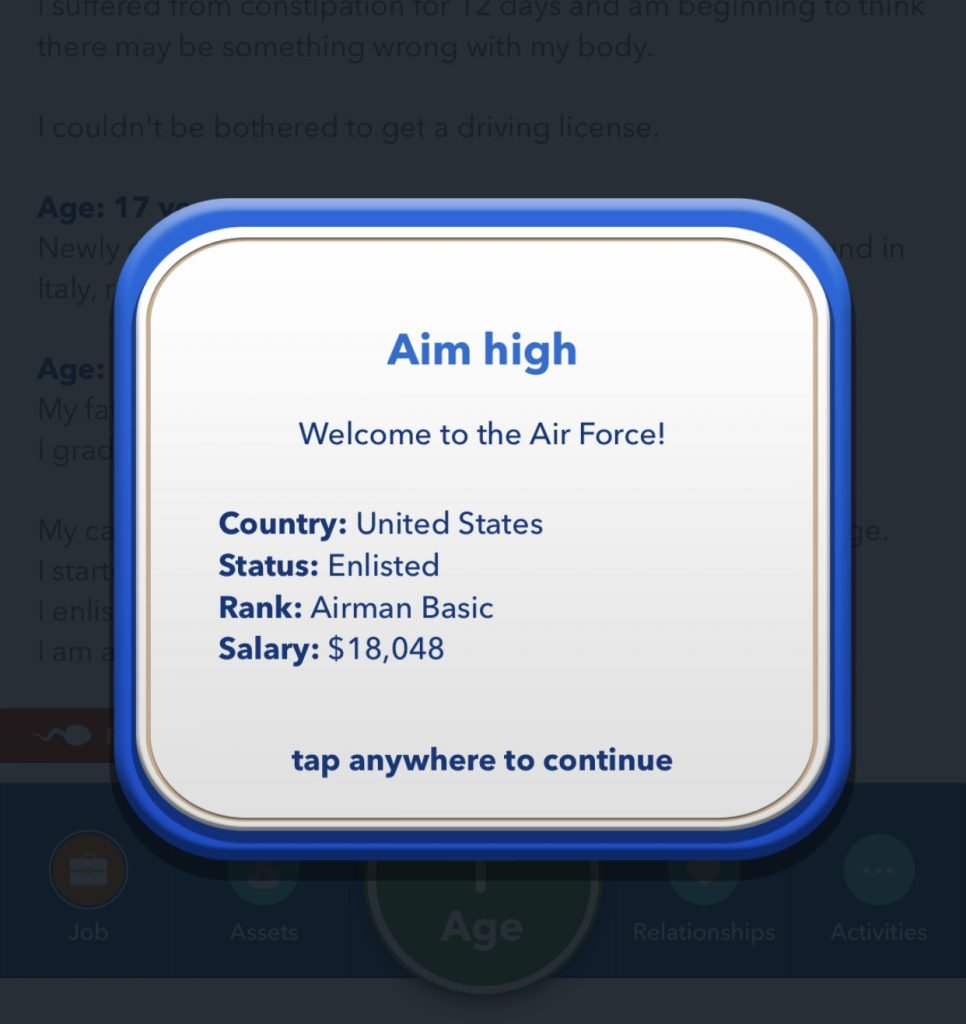 Once you join the branch of the military of your choice, just stay in, work hard for awhile, and then make it to E9, which is the highest enlisted rank. Once you get there, your promotions are done, so wait out your time until you hit mandatory retirement age, at which point you can earn a pension. 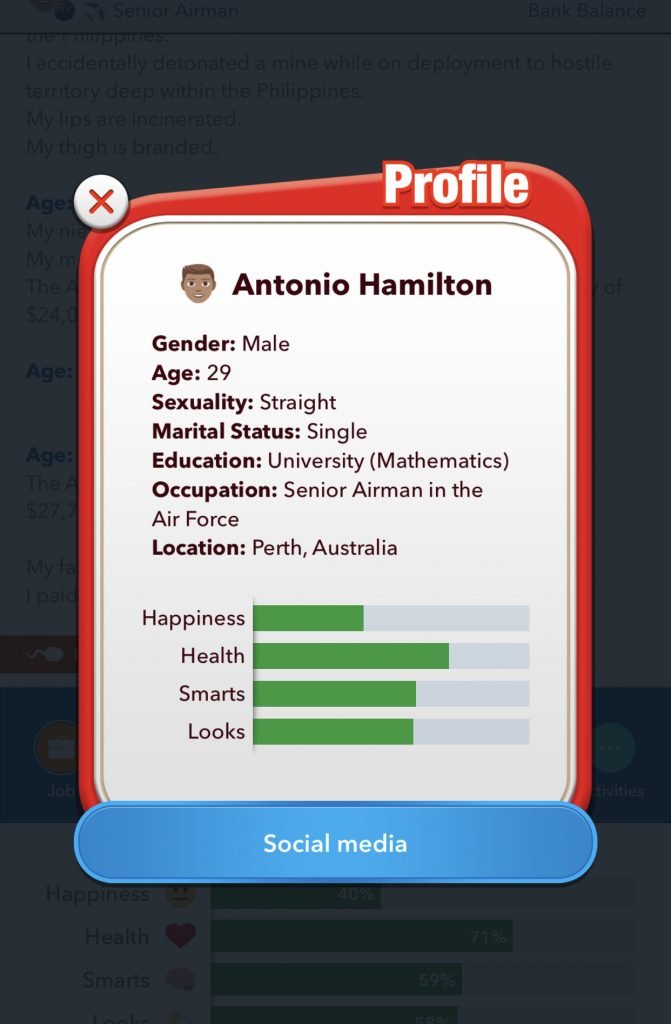 To get promoted high, go on every deployment you’re offered, and collect medals for succeeding. Work hard, stay in for a long time, and continue improving yourself. Most of your promotions come just from sticking around for a long time though, so stay in for as long as possible to get as high of a rank as possible.

Becoming an officer is the key to making a huge amount of money in the military. Officers are one of the higher-paid professions out there, especially depending on the country you’re from. Euro-zone nations tend to pay the officers in their militaries the highest out of any country.

Once you get to that point, apply to become an officer in any of the five branches (number of branches may differ depending on what country you are from). Once you get accepted as either an ensign or lieutenant (depending on if you’re in the Navy or another branch), keep working harder.

Work harder every year, age a year and then work harder again, and hope that you get promoted. Becoming an officer is the first key to making rank as either an Admiral (if you’re in the Navy) or General (if you’re in another branch of service besides the Navy). 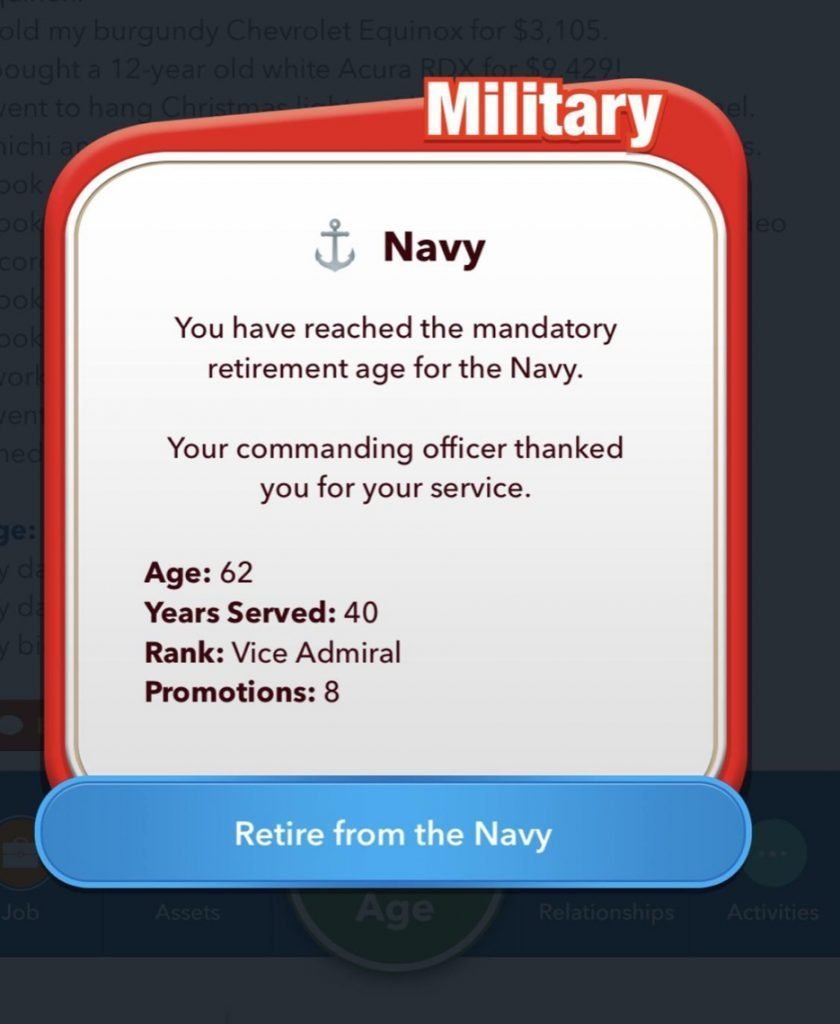 When you’re in the military, every once in awhile, you’ll be tasked to deploy. You can either choose to go on the deployment, or you can refuse. Refusing to deploy could affect your promotions, your job status, or your commanding officer could force you to go anyway. 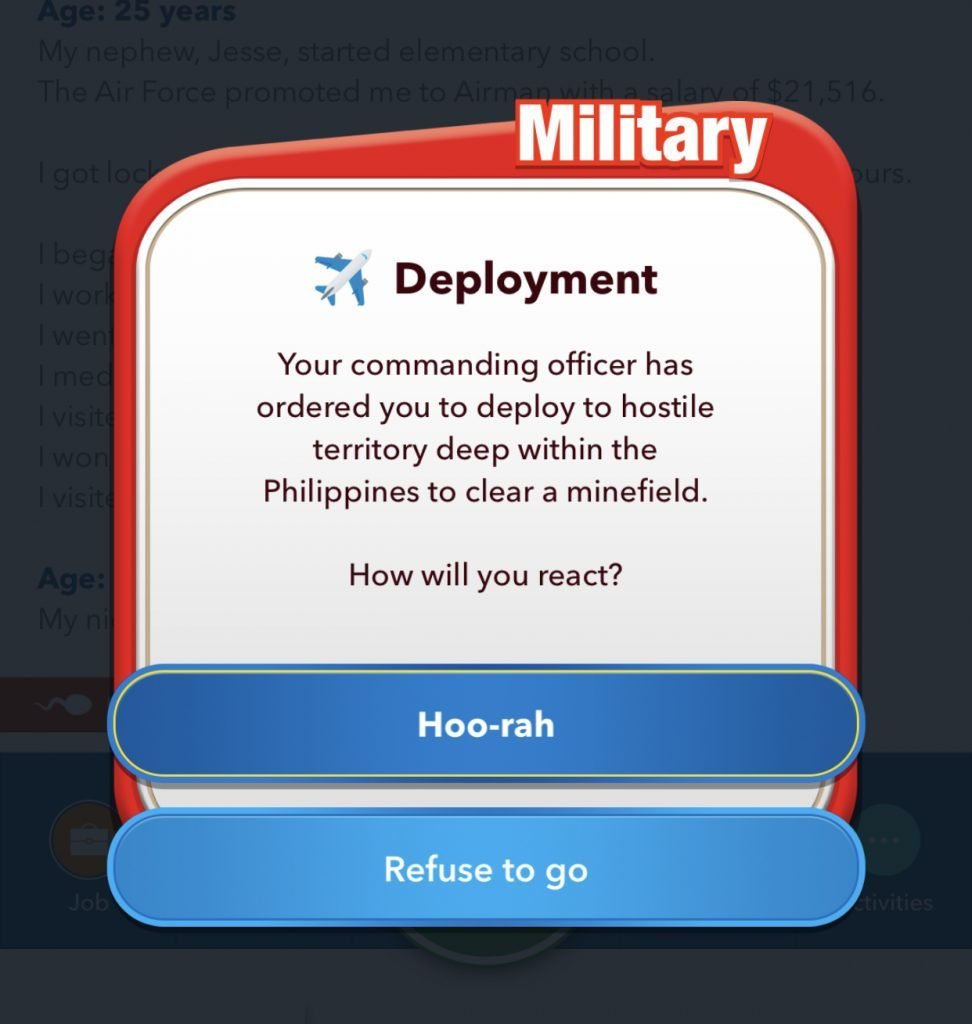 If you do decide to deploy (or get forced to deploy), the deployment game will pop up. You can either play it or you can desert your post. If you desert your post, then you’re immediately out of the service that you were previously in. You’ll also be at risk of being arrested for desertion. If you try to get back into the military for some reason, you’ll 100% be arrested for desertion.

If you decide to play the deployment game, then take note of the fact that it’s literally the same game as Minesweeper for old Windows computers. Try to tap on the correct tiles and stay away from the mines. So how do you know what the correct tiles are? 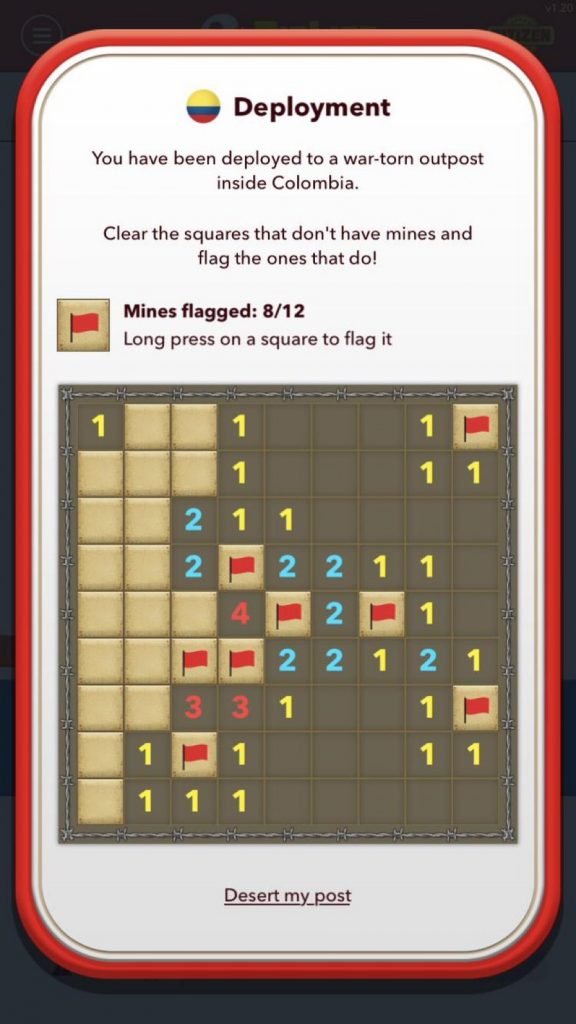 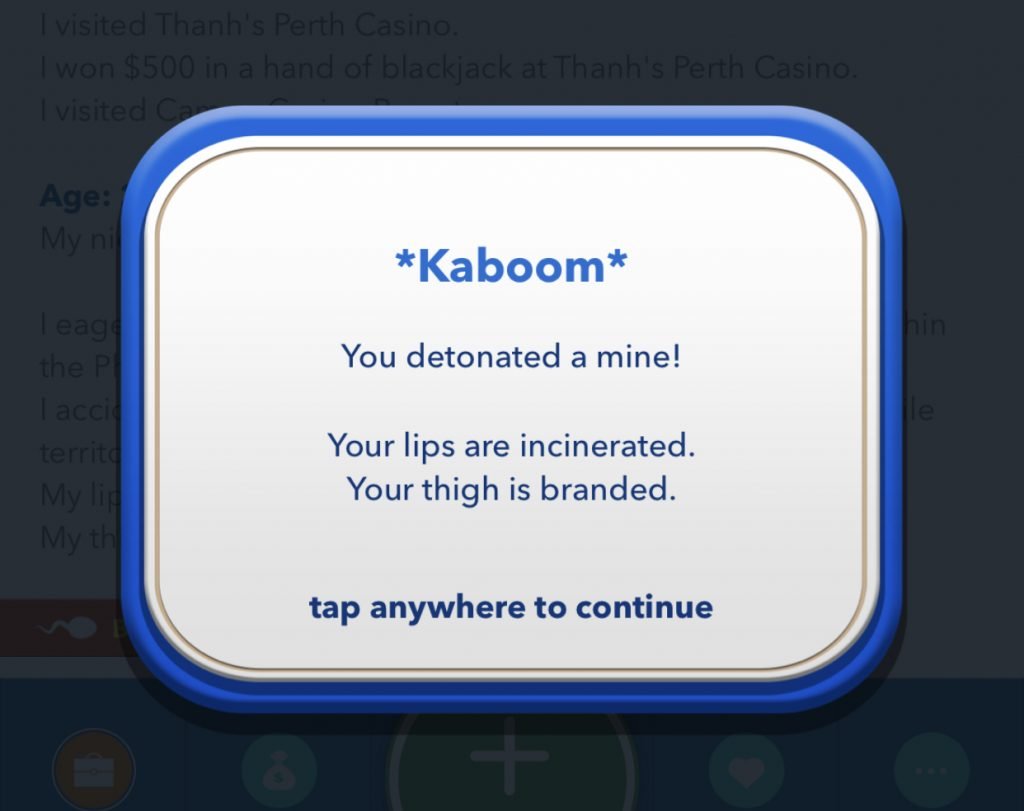 If you do end up stepping on a mine by accident, you’ll get injured, which mostly leads to drops in your health and happiness. You’re also put at risk of other medical ailments, such as PTSD. Be sure to go to the doctor to take care of any ailments that occur when you hit a mine.

Go to the gym, the library, the movies, and meditate in order to get happier and healthier. Tap on the “boost” icon that pops up over a really low stat to accept a prompt that can help increase your low stat. Spend time with your friends and family, and get a pet. 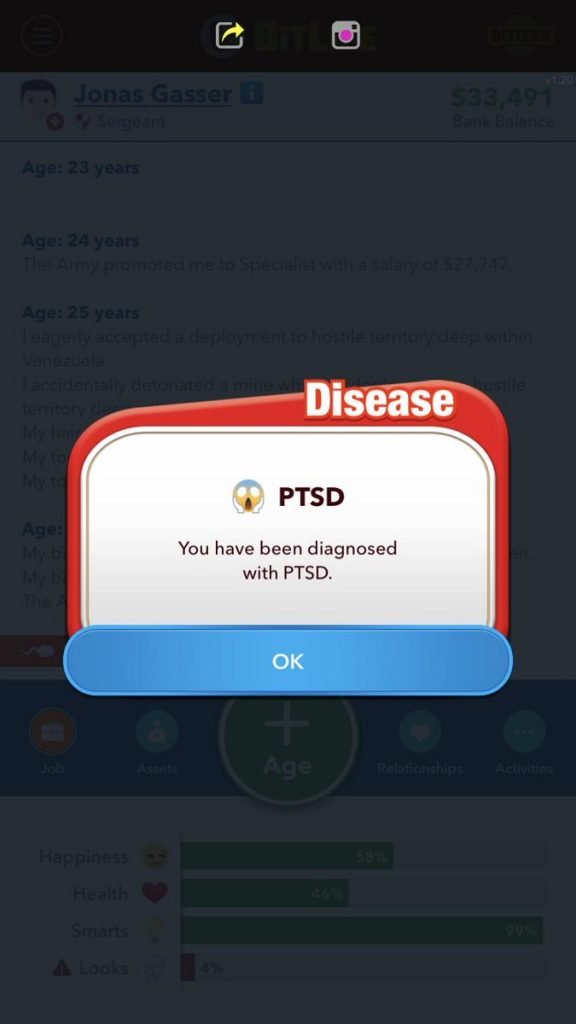 You do, though, have a chance of having your life taken from you instantly when you hit a mine. If you do get polished off, then you automatically get the “Hero” ribbon for your efforts, but your life ends. You can either start over with a new character, or you can start over again with the same character. Or if you have kids, you can start a new game as your kid. 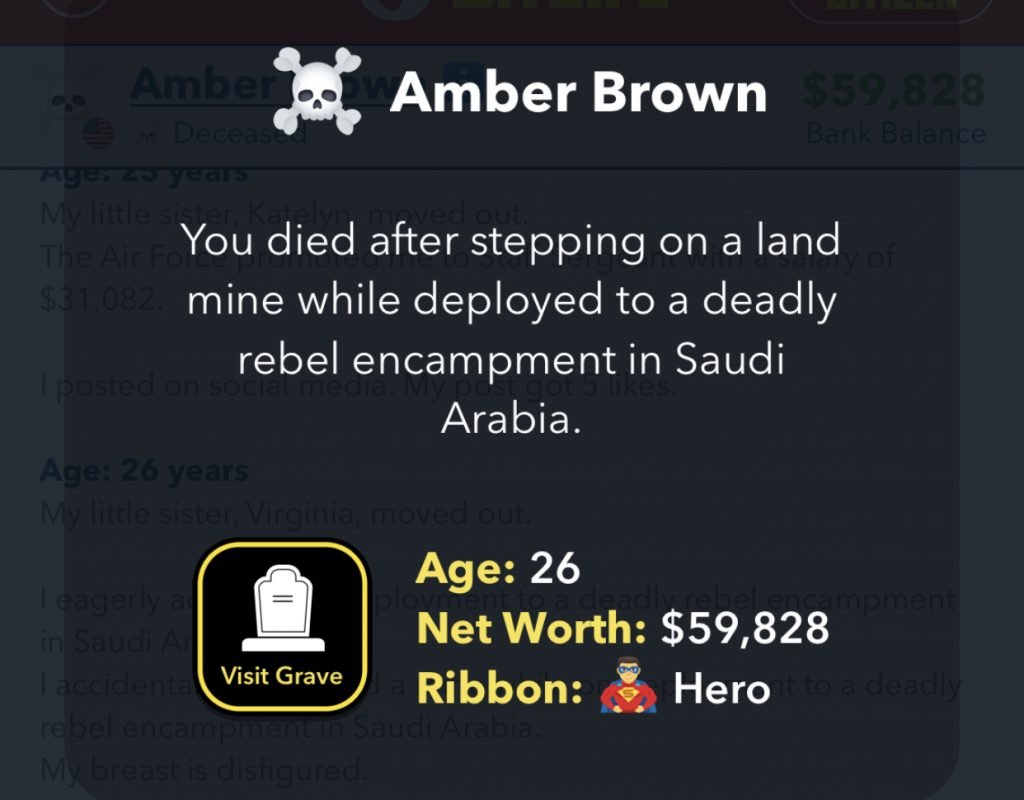 To minimize the amount of times that you get blown up, practice at Minesweeper – either go onto your old Windows unit, or download a Minesweeper app for your iPhone, iPad, or Android device, play Minesweeper until you’re really good at it, then go back to BitLife and use your newfound skills during deployments.

If you do successfully clear out a mine field while you are deployed, then you will receive a medal for your efforts. You have the choice to either refuse the medal, pawn it, or wear it with pride. 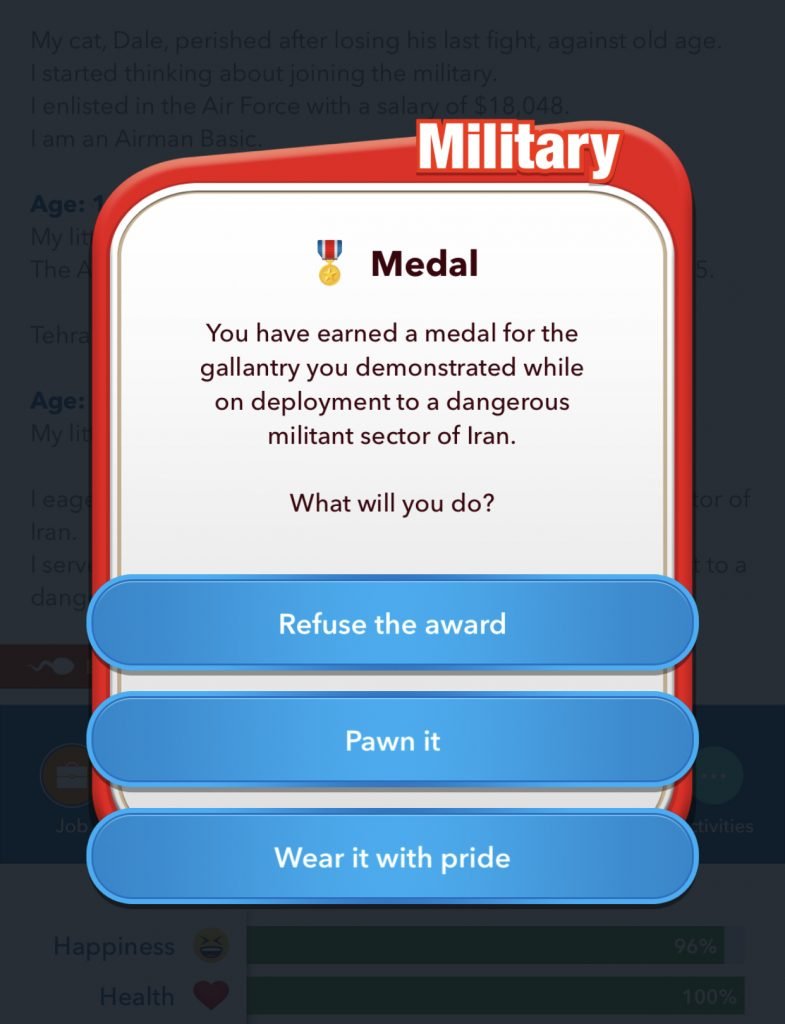 How to go AWOL (Absent Without Leave):

There are many things you can do in this game, but surprisingly, going AWOL is one of the toughest ones to figure out how to do. Most ways of leaving the military involve simply being discharged, but you need to go AWOL in order to unlock specific achievements. 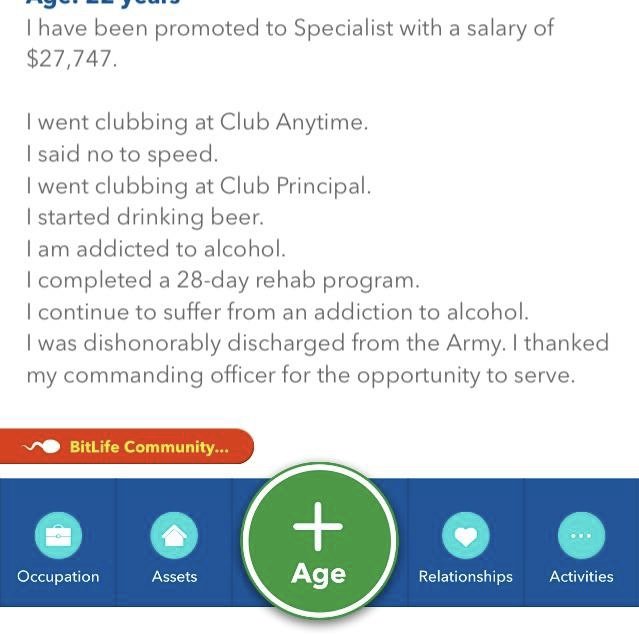 So how do you go AWOL? The surefire way to do so is to do the following: First, get addicted to something. To do this, say yes to every opportunity to drink, to use illicit substances, or gamble, and at random, you’ll develop an addition.

Another way to get addicted is to go to prison for a short period of time. You’ll get offered substances very frequently. Take the drinks or substances that you are offered, and develop an addiction.

Then let your prison sentence run itself out and keep the addiction when you’re on the outside. More than likely though, you’ll get kicked out and dishonorably discharged immediately if you go to any form of prison, in which case this method becomes useless for going AWOL. 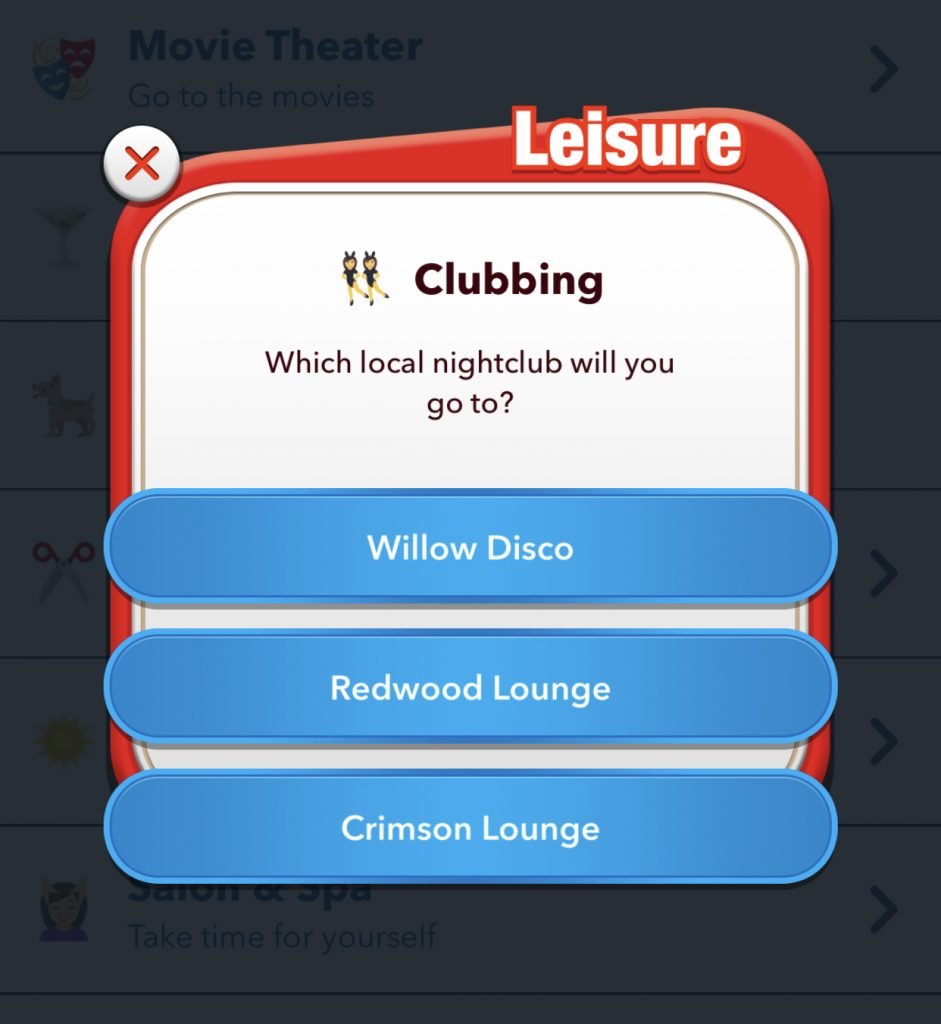 Next, go to the action menu and pick rehab, then go to rehab and get clean. Go to rehab without letting the military know, though, and they won’t be too happy with that. You’ll enter into AWOL status because you are literally absent without leave.

Alcohol and gambling are the most common addictions, and are the ones with the least likely chance of ending you when you try them. Some harder substances have a chance of knocking you off you the very first time you use them, but they also have a very good chance of getting you hooked, giving you the opportunity to go to rehab. 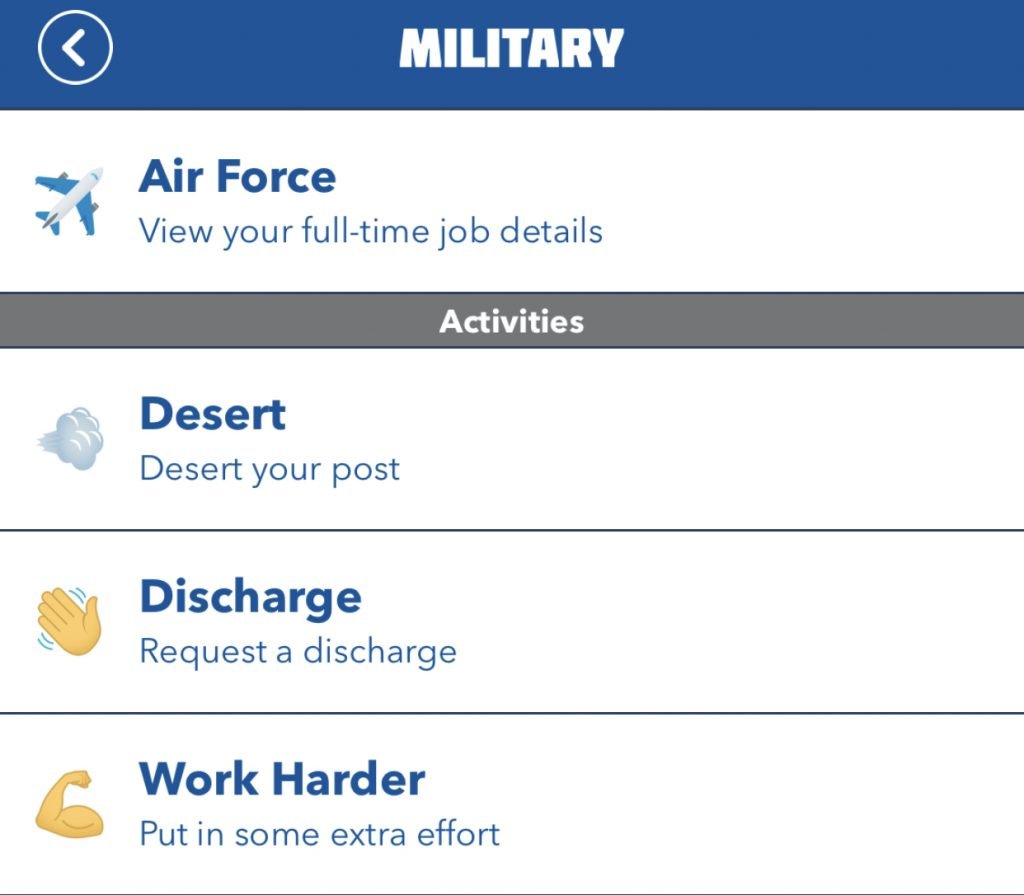 Also, for some reason, fleeing to another country won’t put you into AWOL status if you’re in the military. If you emigrate, you’ll typically get denied, then get the choice to emigrate illegally. If you do, then you’ll be caught, sent back to the country that you’re from, and imprisoned for desertion, but that won’t count as AWOL.

Right now, the only thing that will do so is going to rehab. Getting imprisoned won’t get you AWOL either; it will only get you dishonorably discharged. Deserting your post while you are deployed won’t put you into AWOL status, either, but it will get you arrested for desertion.

How to become a General or Admiral 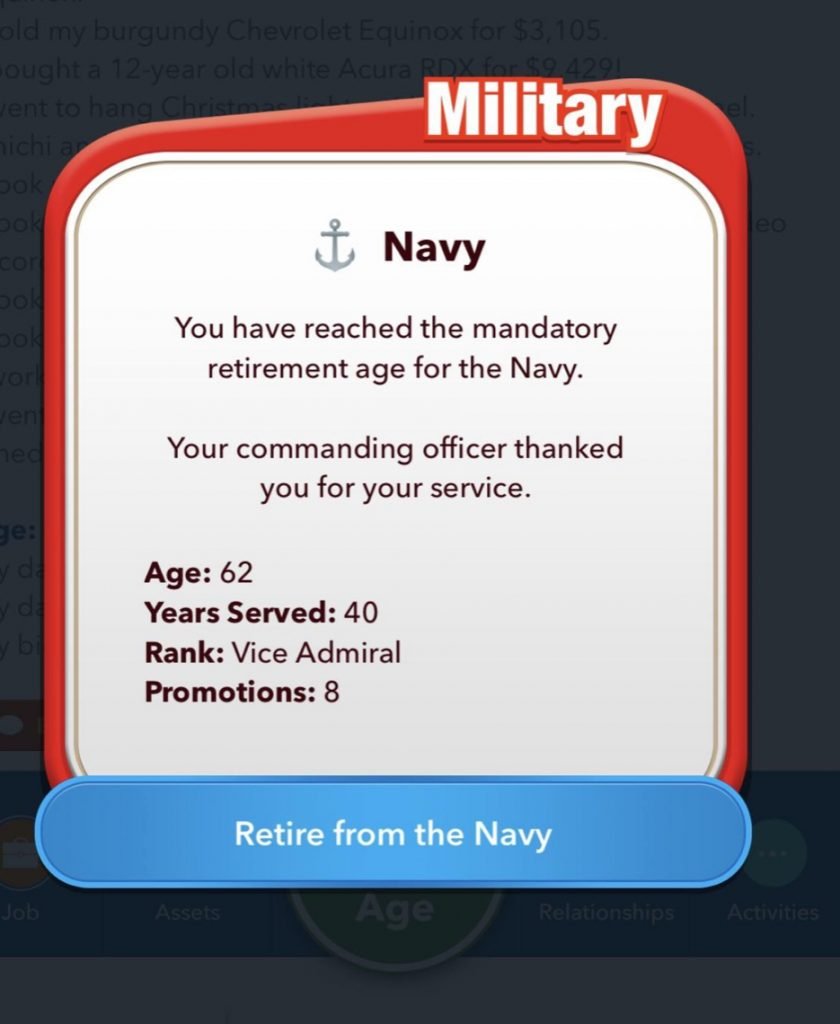 First, you have to go to university. That is the minimum requirement in order to join the military as an officer. Get a four year degree and you’ll be able to join as an officer. Any less, and you’ll only have an enlistment available to you.

Once you become a military officer, keep working as hard as you can at your job. Having good looks helps, oddly enough. Live your life like a Boy or Girl Scout. Getting married and having kids helps, as well. Once you get past Captain rank, literally every aspect of your life goes into effect here. 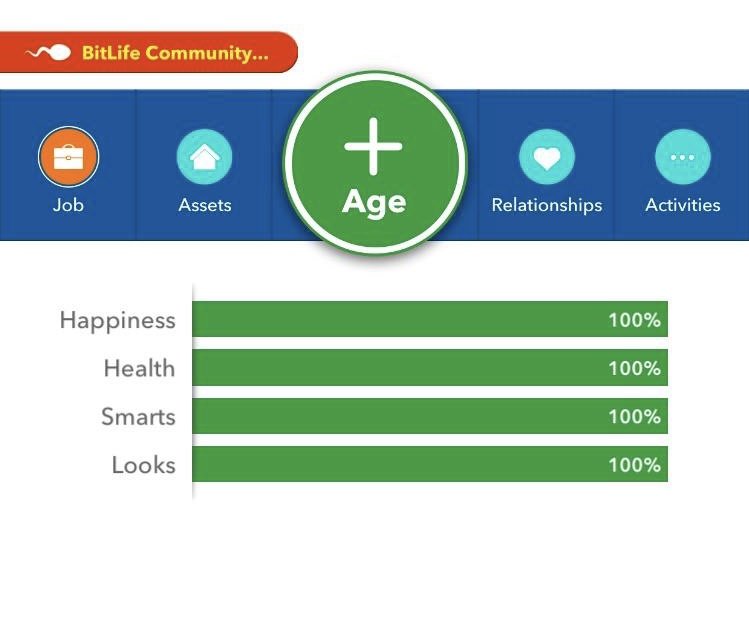 In addition to high looks, have a high smarts rating as well. Even if you are born and raised dumb, you can fix the smarts rating by going to the library and doing every self-care thing available (meditation, gym, etc) as often as possible.

On top of that, continue your education. Keep going to school, and go for your graduate degrees (masters, doctorate, etc) while you are in the military as an officer. Keep this up enough, and you will eventually, finally, make it to the rank of admiral or general. Stay in the military long enough without retiring and you will get there eventually, as time is the most important component.